Your day starts out like any other: another long, boring and seemingly endless day at the hard hat testing company. The hours stretch on and on across a figurative distance so great that only a literal mathematician could compute them. Each unending stretch of hours is punctuated only by the cranial blunt force trauma you willingly endure for a meager salary. Finally, a whistle’s shrill tone cuts through the evening air, signaling the end of your shift and you begin your lengthy, jump laden walk home all the way to the left side of town. Perhaps at this point your mind is wandering, thinking about putting on your favorite and stretchiest pair of flannel pajama pants and putting your feet up on your flat, smooth table with a bag of frozen peas perched upon your tender noggin. You’re so close to home now you can almost taste the slightly spicy red marinara sauce you plan to pour over a steaming hot plate of noodles when BLAMO – and unseen object falls from above and lands directly on your skull.

Gameplay
Such is the life of Ray, the main character in Stick it to the Man. After he gets bonked on the head with the unidentified terrestrial object, he slips into a coma and awakens in a strange dream world to find a “purple spaghetti arm” sticking out of the top of his head. While traveling through his coma dream, Ray learns how to manage some of the spaghetti arm’s more basic functions. The arm can be used like a grappling hook to grab on to thumbtacks that are strategically placed throughout the world. Ray can then pull himself to the tack, which allows him to reach places that those of us without purple spaghetti arms growing out of their heads can only dream about reaching. The movement mechanic relies on thumbstick control and works pretty well, but using an IR pointer with the Wii U would have been a much more intuitive control option. 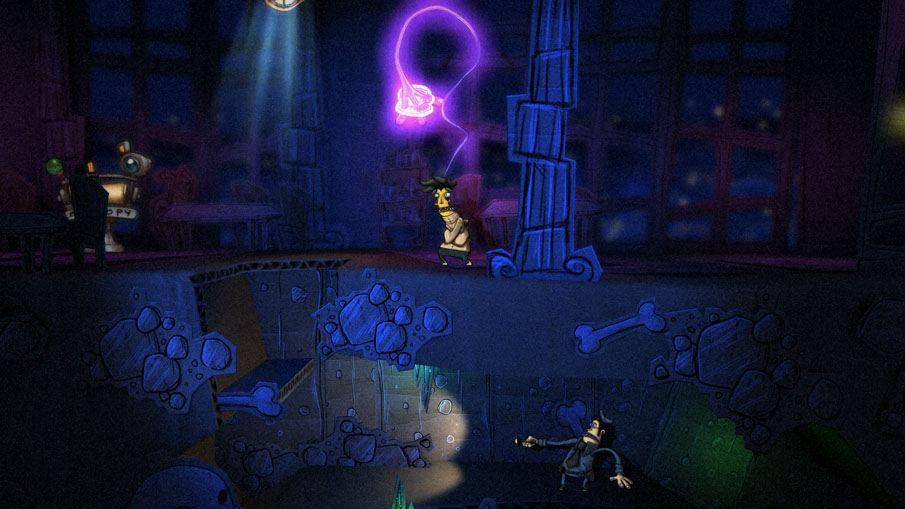 Later on, Ray wakes up from his coma to find the arm is real and not part of his dream. He also learns there is more to the arm that just flinging himself about his papercraft world. Ray can use the arm to read the minds of the people (and other creatures) around him. Reading minds is easier than one would think: simply hold the GamePad upright and its screen will change to a reticule that can be used to target readable brains. Allow it to rest on someone and the purple arm will reach out and stick its fingers into your target’s brain and massage out all of its darkest secrets. Mind reading was also possible by using the thumbstick and a shoulder button, but surprisingly the motion control felt more precise. Sometimes people will think of a certain item and you can use the hand to rip it right out of their thought bubble and put it to practical use. For example, a guard that just won’t give you a window to pass by him may also be sleepy. You can read his mind, pluck the “Zzz” sticker out of his thought bubble and then slap it on him to make him go to sleep. 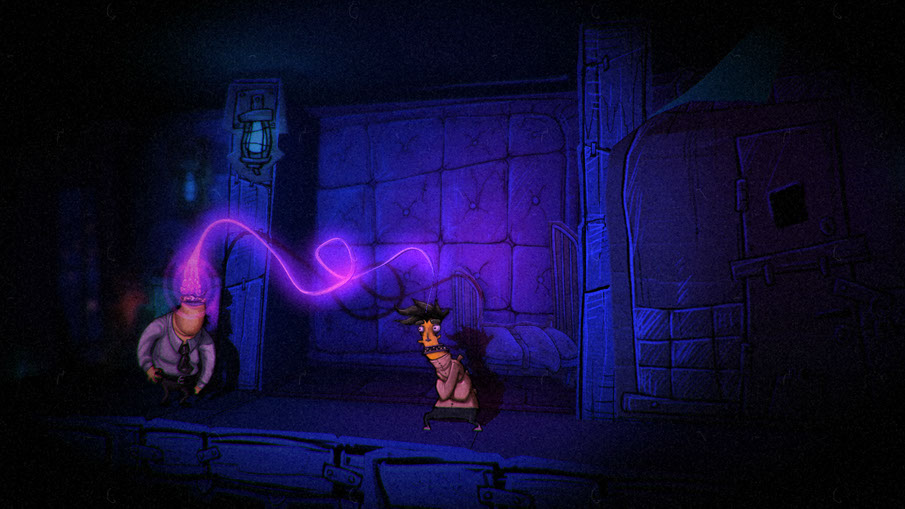 This sticker mechanic quickly becomes the core gameplay mechanic outside of the basic platforming action the game revolves around. Some of the concepts seem pretty farfetched, but you don’t have to spend very long in Ray’s world before the absurdity of it all seems commonplace. Ripping the eyes off of a crazed doctor and then sticking them on a mentally deficient football player won’t even make you bat an eyelash. These puzzles increase in complexity as you advance the game’s short and sweet story, and you will probably be surprised the first time you are completely dumbfounded by a sticker or combination of stickers you need to allow Ray to get closer to his goal.

Presentation
Up to this point, we’ve already shown how creative this game is, but where the creativity really shines through is in its visual presentation. A grainy, old timey film wash has been applied to the entire screen which can be off-putting at first, but once you realize the game is supposed to make you think of a hard-boiled detective novel à la Dashiell Hammett, it only adds to the overwhelming amount of charm Stick it to the Man has. The whole world has been rendered in paper and cardboard with a similar feel as bizarre version of Paper Mario directed by Tim Burton. Occasionally you even get to use your cranial appendage to peel away layers of the background and see what’s going on behind them, which usually results in something hilarious being revealed. There is a grim tone to the game’s visuals, with the shapes of buildings and people’s proportions giving its atmosphere a delightfully lurid appeal.

The game’s music doesn’t really stick out much, but that isn’t always a bad thing. It is atmospheric and further adds to the feeling that you are watching an old detective film from an alternate dimension. However, the voice acting in Stick it to the Man is superb. All of the characters deliver their lines perfectly and the comedic timing of their hilariously absurd lines is absolutely spot-on. I can quite happily say that this is one of the first games to make me laugh like a fool. 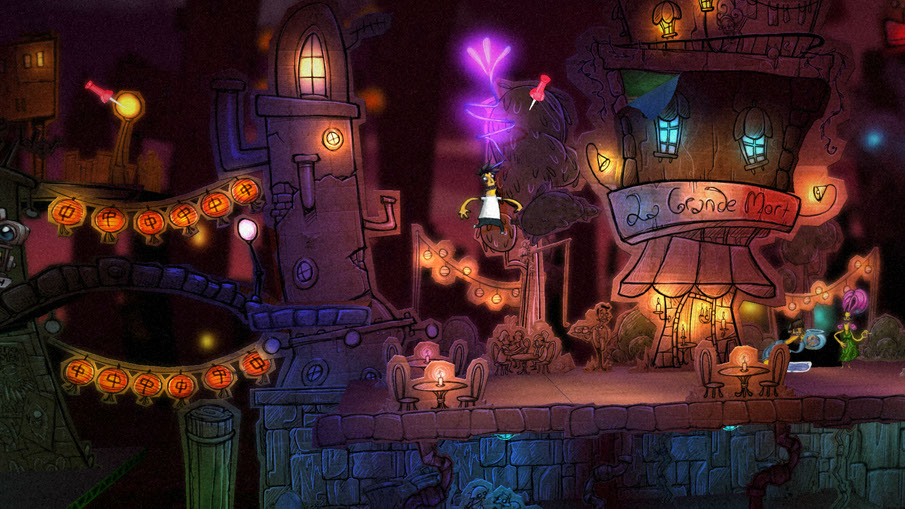 I wonder how much faster I’d get to work with one of these noodle hands.

In a typical day you go to bed, get up and go to work, do a few things in between and then go back to bed. The mundanity of our daily routines may be unappealing at first, but if you were like our friend Ray here and got konked on the noodle only to awake and find a long, purple noodly arm growing out of the top of your head you may be happy for those days that seem to stretch out into eternity. After spending a few moments in the papery diorama that is the world of Stick it to the Man, it will be stuck with you. You will want to tickle every temporal lobe to find out what it has to say and you will gladly scour each area high and low for bits and pieces you can rip off and stick elsewhere. Its twisted sense of humor, lovable characters and puzzles that are actually fun to solve more than make up for the short amount of time you will get to spend with it.