As the roar of the 20s quieted into the purr of the 30s, an American astronomer named Edwin Hubble, using big words like recessional velocity, “relativity” and “megaparsec”, rocked the scientific community the world over by suggesting that our universe is expanding. This discovery sent out a seismic shock wave that is still felt today. The buzz from talk of “the universe” isn’t only confined to sterile laboratories or dusty libraries; we observe it in Hollywood blockbusters like Interstellar, or even read it in sci-fi horror books like Stephen King’s 11/22/63. For us gamers, one very notable universe is expanding as well. First observed in 1991 by the youth of the time, they described the phenomenon as a highly saturated, pixelated blur of blue. This blur was eventually attributed to a ring collecting, spinning hedgehog named Sonic who had oodles of attitude. Over the course of the last two decades Sonic, along with his trusted pals, has vanquished nefarious villains, raced across the globe in transforming vehicles, played pinball and even competed alongside a mustachioed plumber at the Olympics. Now the Sonic universe has expanded further, with Sonic Boom: Rise of Lyric.

Deep inside a lush jungle, our beloved azure blur, along with his friends Tails, Knuckles and Amy, find themselves in an ancient catacomb, where a mysterious and evil mastermind named Lyric has set into motion a dastardly plot of world domination. As someone who frowns upon sadistic enemies who justify their malevolence with entitlement, Sonic tightens up his new neckerchief, re-wraps his tender ankles with bandages, and sets his sight on a mission to stop Lyric at all costs. Our fearless foursome will race at breakneck speed through the loop de loops and whirly-twirls of an overgrown tropical wasteland, slow it down to explore relics from a bygone era and encounter hordes of war mongering robots blocking their path. With teamwork, and a little help from friends both new and old alike, you’ll dash, glide, jump and burrow your way to certain victory. 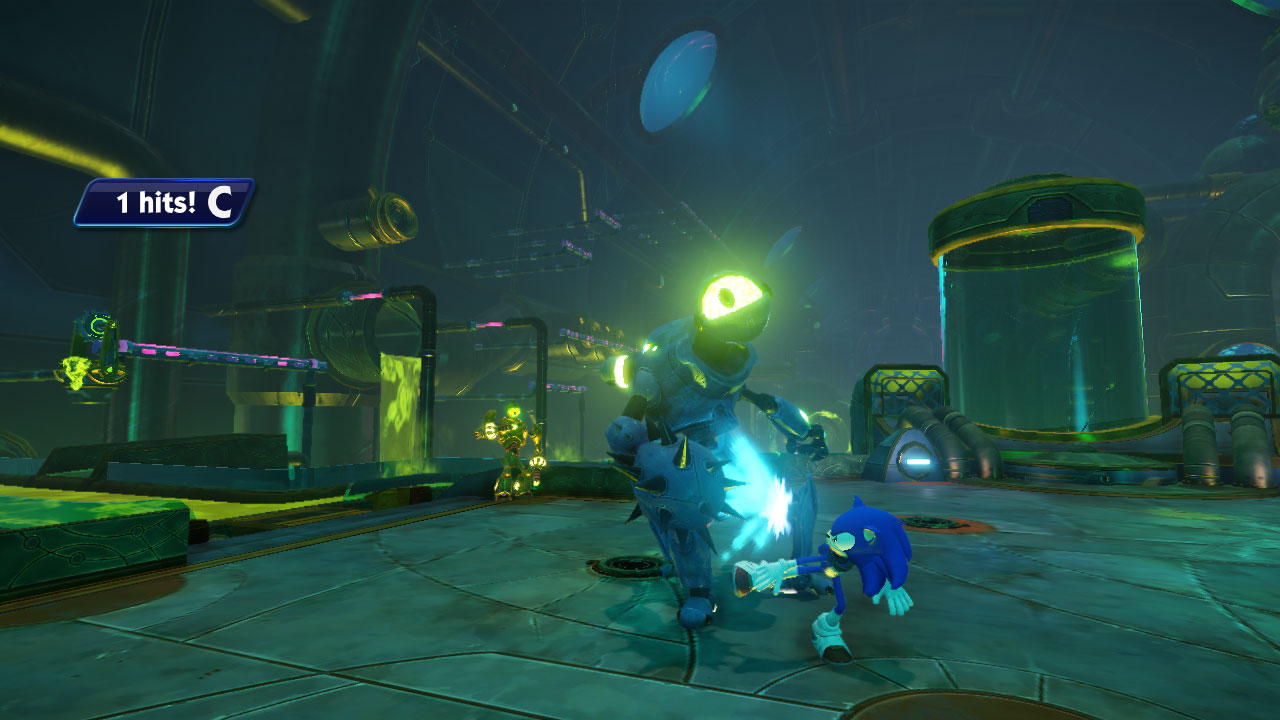 Sonic Boom: Rise of Lyric for Wii U is a cornerstone of the newly established Sonic Boom universe; a CGI animated TV series on Cartoon Network, full line of newly crafted merchandise and a Nintendo 3DS exclusive title Sonic Boom: Shattered Crystal. As often seen in reboots, and re-imaginings, the visual aesthetics change. If you have not yet been exposed to this new world of Sonic, you might initially be taken aback from the changes SEGA has made to their flagship mascot and his pals. Sonic is now sporting a neckerchief and is apparently suffering from an undiagnosed foot/ankle condition, Tails one-ups Sonic with a nifty pair of welding goggles and tool belt, Knuckle’s DNA must’ve been spliced with Arnold Schwarzenegger’s and Amy got a new outfit. Perhaps these changes are explained on Cartoon Network, but as far as Rise of Lyric, these changes do not effect game play or add to the plot line.

Big Red Button is the first Western game development team to work on the Sonic series, and they seem to have taken the American idiom, “everything and the kitchen sink” to heart. You’re introduced to Rise of Lyric with one of “modern” Sonic’s semi-automatic speed runs, where you rush at breakneck speed through a spiraling course, slightly moving bi-directionally and periodically jumping to collect an overly abundant amount of rings (it’s basically Temple Run but with Sonic). Moments later, you’re exploring an open world setting at a snails pace causally beating up enemies and double jumping over ravines or slowly working your way up the stone platforms of ancient ruins. There is also “old school” Sonic 2D platforming with jump pads, spin dashes and puzzle solving. As if that wasn’t enough, there are also character specific alternative pathways that open depending which character you’re playing as, their special abilities and how they interact with the surrounding environment. A hefty portion of the game is nothing more than simple brawling, enduring wave after wave of melee combat using standard ground pounds or your playable character’s special attacks. If you still haven’t had your fill, you can leisurely explore one of two villages, which serves as a world-hub. These vast villages are ripe with NPCs who will task you with side quests in exchange for rewards that can be used to unlock upgrades. While the “kitchen sink” theory of gameplay styles serves as a solution for the “can’t please everybody” mentality, it’s also a jumbled, incoherent experience. 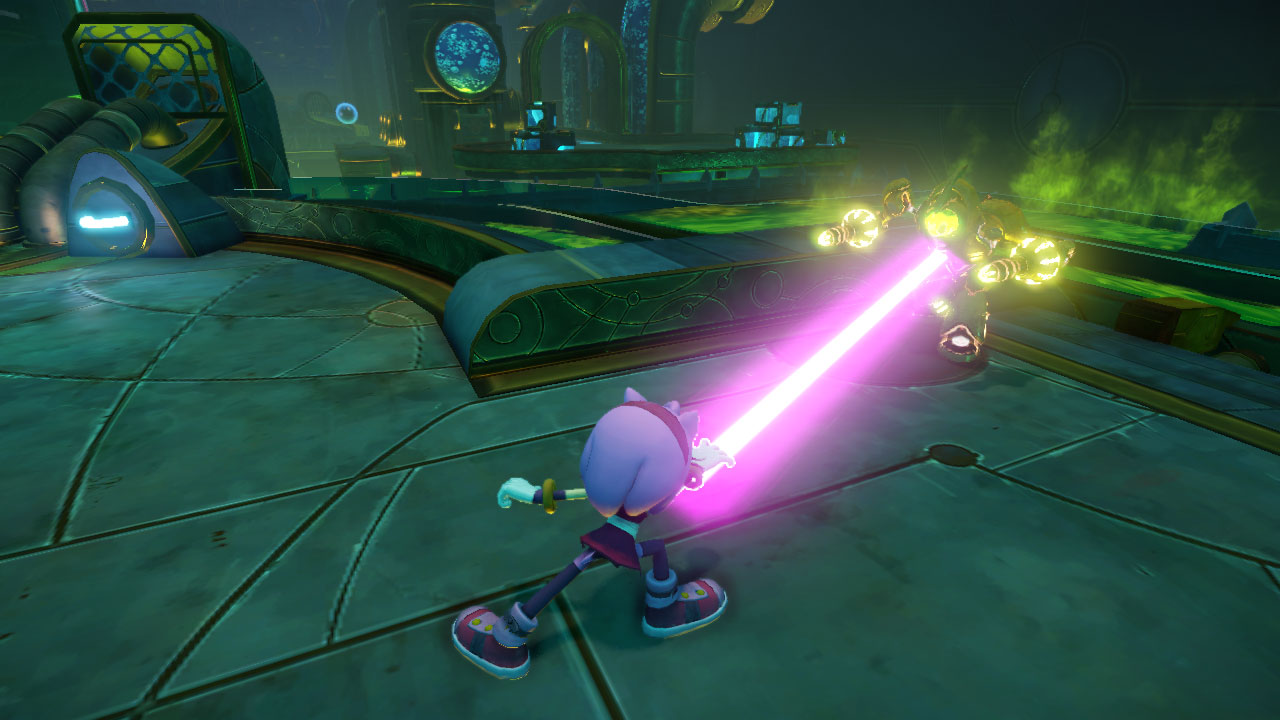 This collage of gameplay concepts that has been hobbled together could have maybe been forgiven, especially considering the fact that Sonic Boom is clearly made to sell toys to a younger audience, but there are some crucial technical aspects of the game that just don’t work. The frame rate of both cinematics and in-game action is incredibly choppy. Within the first five seconds of beginning a game the lag was noticeable both visually and audibly. In the free-roaming sequences, the camera either doesn’t move at times it’s supposed to or is so freakishly wobbly you may think you’ve accidentally sat down on a washing machine running its spin cycle instead of your favorite beanbag chair. Transitioning between styles of gameplay is a jarring experience that should have been handled with a bit more finesse to avoid creating such an overall feeling of disjointedness.

Visually, the game isn’t really much to look at. Textures and color palate look like what I imagine a Wii game in 1080 would look like. Everything is kind of muddy and blurry. Characters lack the smoothness and colorful eye-catching factor that we’ve seen on other Wii U titles, so it can’t be attributed to the console’s lack of horsepower.. As far as sound goes, the most notable thing to discuss is the voice acting because there is a lot of talking. Even when the cutscenes are over, Sonic and his chums talk endlessly to tell the player what they should be doing or where they should be going. There’s a weird aloofness to they way they talk which gives the impression the characters themselves don’t want to be in the game. Doctor Eggman sounds much less maniacal as he has in the past, and instead, alternates between sounding like a bored accountant and an effeminate man that would say “toodles” and waggle their fingers at you as they leave a room. 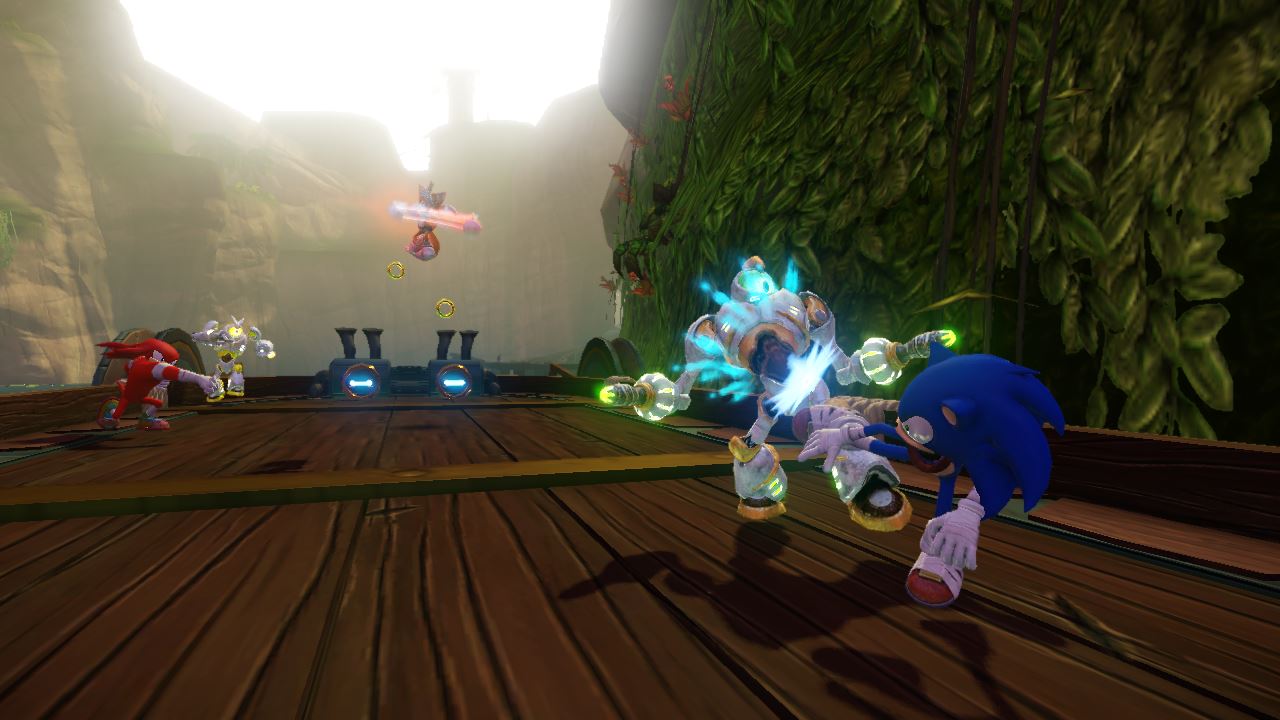 Sadly, most screenshots out there don’t really relay how the game looks when it’s actually being played.

The budding scientist in all of us might confuse the title of the newest Sonic game with the booming sound associated with the shock waves. Much like when Sonic blasts out of his famous Spin Boost, a sonic boom is created by an object traveling faster than the speed of sound. Unfortunately, the only thing booming has been the resounding and collective “MEH” that was heard as Sonic fans both young and old checked out this game. Everything that made Sonic great has been cast aside here. Instead of brain-melting bursts of speed and cleverly designed platorming we get a boring brawler with some easy puzzles and tedious world exploration. Any physicist worth their snuff can tell you the widely accepted theory of parallel universes; one universe for each potential outcome of a scenario. That means that somewhere out there in another dimension there is a modern Sonic game that is good, it’s just a shame that isn’t the dimension we’re living in.