When I was a child, I believed in magic. There were dragons that lived in concealed caves beneath the tightly packed soil of my backyard, and an ancient crone enchantress that lived in the house across the street. She was a quiet, reclusive sort of witch and I felt it was my duty to keep any other children in my neighborhood away from her front stoop, lest they be turned into some creepy crawly critter for her malicious menagerie. I lived in my own grand and mysterious world filled with all sorts of things you have probably never heard of before. This mystical world drew its power from a singular source; the books I voraciously read all throughout my youth.

Story
Now that I am older, I find myself reading a lot less, but I am not less prone to letting my mind wander in a fantastic direction. These days a large part of my daydreaming draws its inspiration from video games. A new game has hit that perfectly encapsulates the feeling of a child who has to walk very softly over his own backyard as to avoid waking the scaled beast that slumbers beneath it. Child of Light, from Ubisoft Montreal, is an incredibly story-driven RPG that follows the adventures of a young Austrian princess named Aurora. An illness gets the best of her, she succumbs to it she awakens to find herself in the land of Lemuria. It is a strange and wondrous place, but unfortunately its sun, moon and stars have been stolen by the treacherous Black Queen. If she hopes to ever return to her home and her grief stricken father she must free these celestial lights from the Black Queen and return them to their rightful place in the sky.

Along the way, Aurora is helped by a firefly named Igniculus (who is playable by either the main player or a second player) and several other unlikely allies. There is the endearing spellcaster who wears a fish-shaped hat and seems to blow spells out of his pipe. There is also a jester that befriends Aurora who can’t seem to follow Lemuria’s unspoken rules of rhyming speech and constantly gets corrected by the other characters. Somehow, all of the dialogue in Child of Light rhymes completely and manages to do so without feeling cheap or taking on an obnoxious “sing-songy” feel. It really helps lock in the fairy tale feeling of this wonderfully written take on the classic coming of age story.

Here is where your adventure begins.

Presentation
If you saw anything about Child of Light before it launched, you probably already know about its stellar visual presentation. The game runs on the Ubi Art engine, which is the in-house engine developed for games like Rayman Origins and Rayman Legends. The games share a similar animated feel, Child of Light looks more like the sketched artwork from a story book while the Rayman games have more of a Saturday Morning Cartoon feel. Characters are articulated almost like a puppet is just at the essential joints, which gives the illusion that they have stepped right of the page of a book and into real life.

As you guide Aurora and her ragtag crew through the stunning world of Lemuria, you will be encouraged to explore every nook and cranny within it. Very early in the game’s story, Aurora is granted the ability to fly freely through the world without any limitation like a power meter that would force her occasionally to the ground when depleted. Once this happens, you will find yourself soaring to the top edges and corners of the screen in hopes of finding a hidden treasure chest or one of the many collectibles that help hash out the game’s story even further. If Aurora is low on health, you can collect wishes from a plant. Once they’re released, they form a small stream of orbs that quite often lead to a crevice you would have overlooked before.

While you’re flying around the beautiful, melancholy world that Ubisoft created for us, the sounds of Cœur de pirate will hang an incredible audio backdrop for your adventure. The music is typically ambient and orchestral in nature and always invokes the right emotion at the appropriate time; it is effectively triumphant, sad, excited or even dangerous feeling without ever getting in the way of the game’s narrative or its gorgeous visuals. 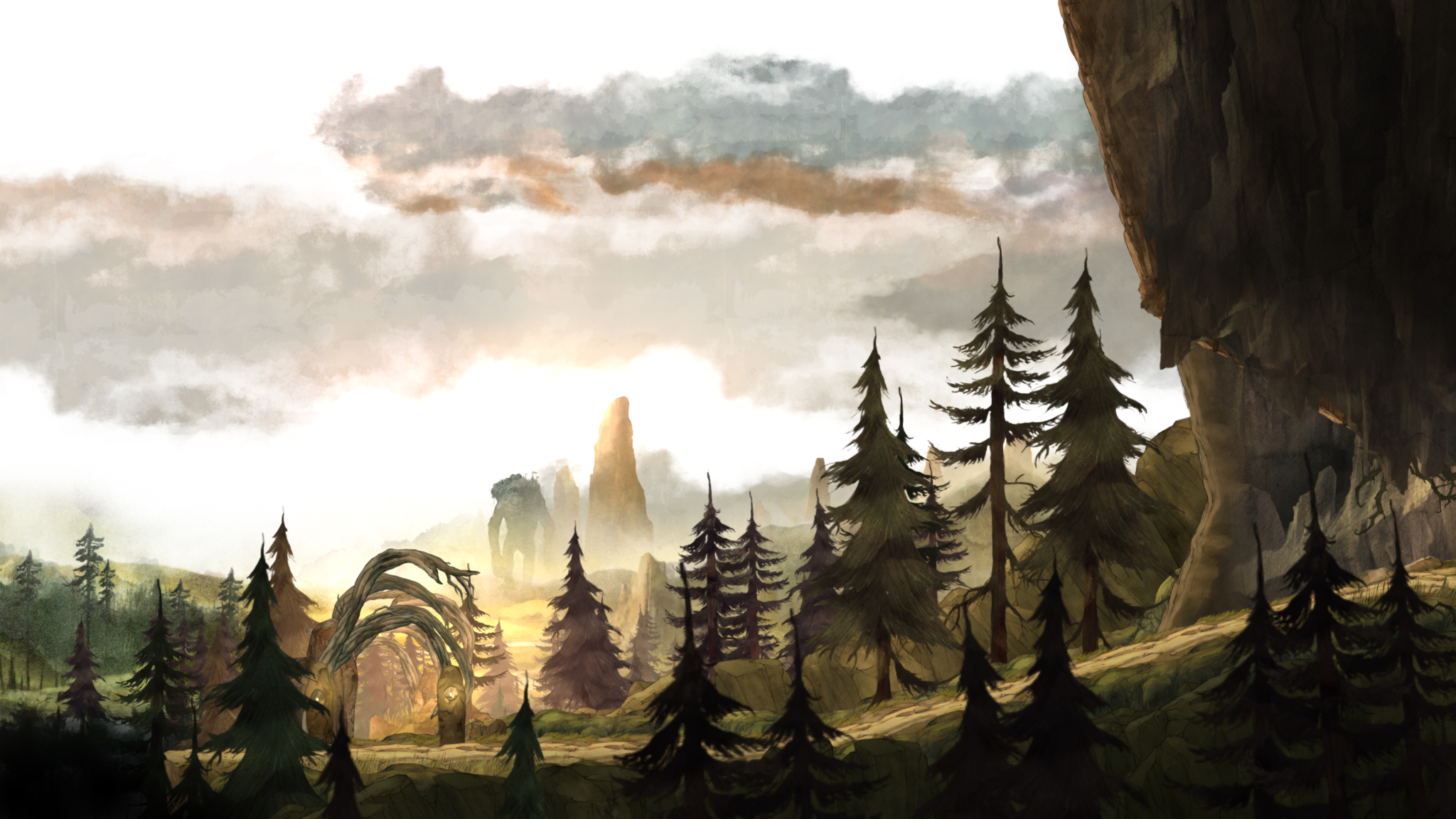 Gameplay
If marvelous graphics, sound and story aren’t enough to convince you that this game is worth bringing up to the top of your “need to buy” queue, then consider the turn-based combat. It takes an approach to the system that isn’t entirely new, but will seem fresh to most people. For a majority of the time you are playing Child of Light you will be experiencing a 2D platformer. Initially you will be figuring out how to make a safe trip across the map by jumping around on platforms in the traditional sense of the genre, but once Aurora learns how to fly the platforming becomes much more about finding hidden routes and dodging obstacles. There are also occasionally some puzzles in the game that you must solve in a variety of ways. Quite a few of them rely on the use of lights and shadows, which ties in nicely into the overall theme of the game.

When you run into an enemy you will be transported to a combat screen. Here you can have up to two heroes active at one time to fight against the enemy or enemies you have encountered. At the bottom of the screen is a timer bar divided into two segments: “wait” and “cast”. An icon representing each combatant moves along the timer at a different rate depending on their speed.

While the character’s icon is in the “wait” segment of the time bar, no action can be taken. As soon as it enters the “cast” segment of the bar you can select an action for that character that will be carried out as soon as their icon hits the end of the “cast” segment of the bar. The fastest characters have the clear advantage in this type of combat. During these fight scenes, Igniculous takes on a couple more important roles. Firstly, he can be used to collect health and magic refills from the plants that are on the battlefield. Secondly, he can shine his bright light on an enemy to slow it down. If you time these light bursts appropriately, you can sometimes prevent an enemy from ever getting in a hit before they have been defeated. Coordinating this sort of effort with a second player is one of the more refined moments I’ve experienced in cooperative gaming, because Igniculous’s light ability is limited by a meter. Use it too much of it and he will be dim while it recharges, so it is crucial to get the timing exactly right.

Successfully defeating a pile of monsters will net everyone in the party some experience points, even if they didn’t join the fray. Once a character earns enough points to level up, they are also awarded a skill point that you can spend however you like on that particular character’s skill tree. At first glance these skill trees can look pretty intimidating, but it is easy to decide on a skill you’d like to add and then spend points on all the requisite skills needed to get to that ultimate point. While this system isn’t an entirely new idea, it is rare to see this much depth in a game on which you will spend so little money. 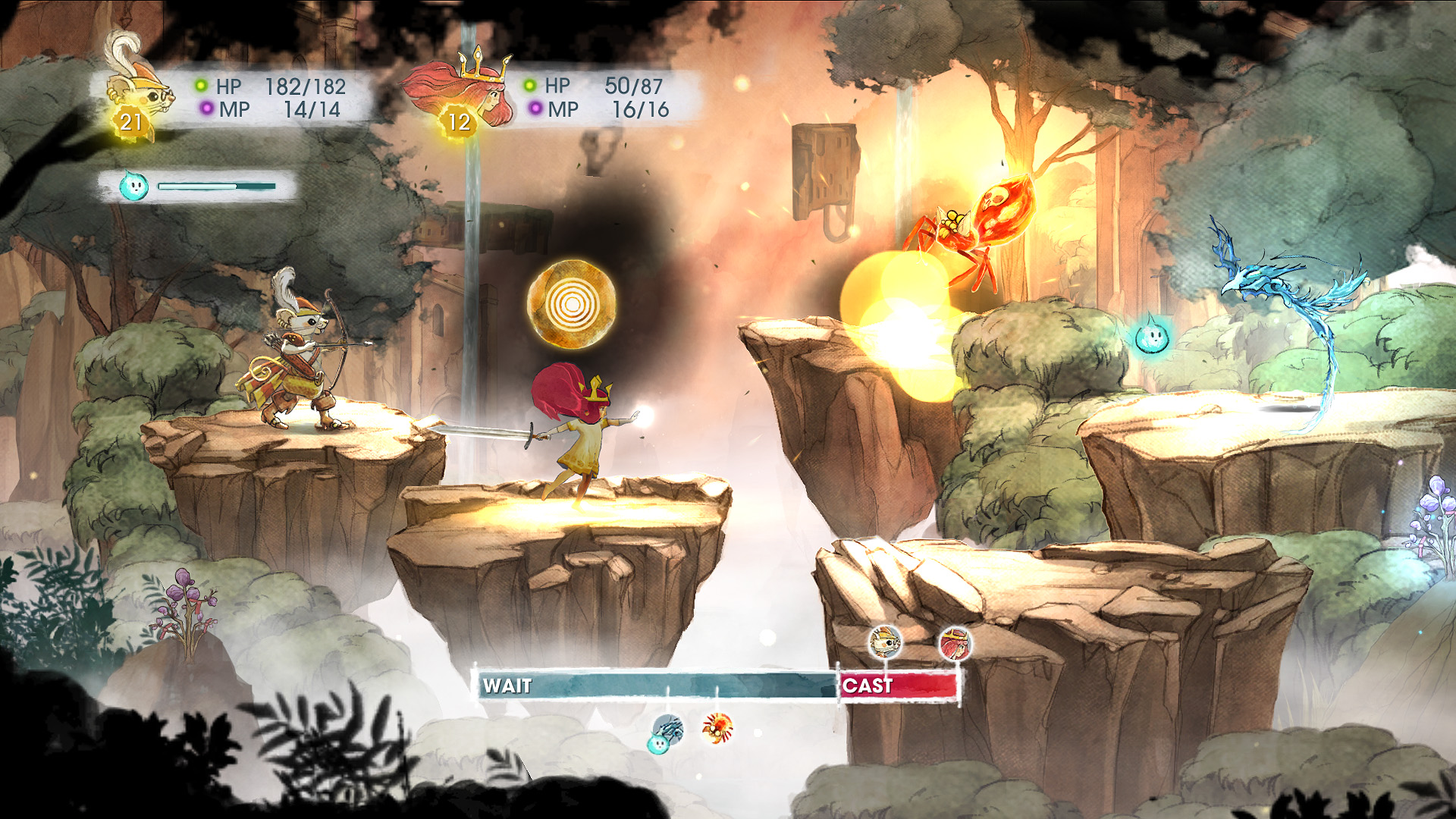 I try to be as objective as possible when writing about games, and yes, the technical aspects of this game are all very sound and it has the distinction of being able to stand next to an indie artsy game or a triple A release. To look at this game on these merits alone would cause me to miss the fact that so much of what makes Child of Light great is how the game makes me feel. When I look at Lemuria as a whole, I feel intrigued by its contrasting themes of light and darkness and the environments that are a strange and seemingly impossible combination of creepy, delightful and sad. When I hear the poetic banter of the world’s denizens I am transported back to my younger years when a loved one would read me a story. When I see Aurora kicking monsters’ asses and taking names – all while gliding effortlessly over a bizarre landscape on wings so delicate they are nearly invisible I feel like learning to believe in magic again would be a worthwhile endeavor.