I’ve publicly declared that regardless of how much I may adore Pokémon games, I do not care for the spin-offs. It’s actually quite embarrassing just how public I have gotten with these declarations. I proclaimed my undying love for only the core of the Pokémon franchise as I walked up and down the aisle of a city bus. I have hijacked the loudspeaker at my local supermarket just to explain the level of disdain I have for Pokémon Ranger games. Once my fugue state has ended (this typically happens as security is escorting me from the building), I usually remember that there was also a weird little game called Pokémon Trozei on the DS way back in 2005 that was actually pretty cool. It was trying to cash in on the popularity of “match 3” games like Bejeweled, but it was well made and quite a bit of fun.

These style of puzzle games are still pretty popular, with games like Candy Crush Saga dominating a large number of mobile phone users’ time, so it is a little surprising that Nintendo was stealthy when they released a new version of their Pokémon matching game called Pokémon Battle Trozei exclusively on the 3DS eShop nearly a decade after the release of the DS title. The premise of this game remains the same: match any three Pokémon heads together and they will disappear. There are a couple places where this game breaks and tweaks the formula that has been laid out, so don’t worry if you’re afraid that you already have a version of this game just with a different skin.

The Good
Games like this usually require you to swap to adjacent tiles to make a match. In Pokémon Battle Trozei you can drag and drop pieces from anywhere on the board you want. This may make the game sound super easy, but the real challenge is where the “battle” in the title comes into play. Each stage has you battling against a series of Pokémon as they bash into your Trozei box and try to take it over. First they will break through the wall of the box and invade your space, taking up valuable tiles you could be using to make matches. They will continue their attacks from within and if they whittle your health bar down to zero, it’s game over for you. Successfully matching a trio of like Pokémon heads will initiate an attack against the wild pocket monster. After you make your first match, you then want to make as many more as you can before your chance for a combo runs out so you can stack up your damage against your opponent. Every time you chain (one match makes another one happen, and so on) a series of matches you have the chance of triggering a “Trozei Chance”, which is just to say that you have the length of time it takes to complete one combo to make matches of two instead of three. If you play your cards right you can clear out the entire box, receive a new batch of pieces and continue your combo for some crazy high amounts of damage.

Typical type bonuses from the core game series also come into play here. If you’re battling a wild Bulbasaur and you have Charmander on your team, starting your combo off with Charmander will be to your advantage because its fire attack trumps Bulbasaur’s grass typing. Knowing how these match-ups work isn’t necessary to beat the game, but it will definitely make your task a lot easier and a lot more rewarding as you rack up tons of one-hit captures. All current 718 Pokémon are available to be captured in this manner, and once they’re captured they can be used as a partner in any series of puzzles you like. Setting your partner as Charmander would be a great idea if you’re going against a lot of types that are weak to fire, or you could set it to Chansey if you’re struggling against a certain foe because starting a combo with Chansey will heal your Trozei box. 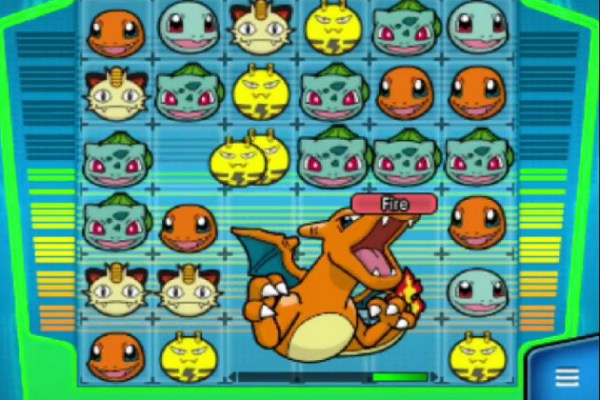 It’s actually kind of stressful when a Pokemon invades your space like this.

The Bad
The downside to the game is that there isn’t much depth in terms of strategy. Sure, it takes a keen Pokémon minded individual to know all the type advantages by heart, but once you get the hang of the core gameplay mechanics, mastering each stage really just comes down to getting a Trozei Chance as soon as possible and blasting your opponent into oblivion with a massive combo. Capturing all 718 Pokémon is nice, because it’s one of the few games you could actually do something like that without cheating, but playing for long periods of time can get a bit tedious. Once you’ve completed a level there will be little reason to go back and replay it, except if it is a level that happens to have a varying assortment of Pokémon. Some only show up once certain criteria are met by the player, or there is the Safari Zone which has a rotating variety of Pokémon depending on what day it is. The game could have been fleshed out quite a bit with some online multiplayer, but as it is only a local multiplayer mode is available and it’s not a very substantial one.

I am not allowed in any Walmarts within a 50-mile radius of my home, so I have no loudspeaker or large captive audience to talk to so the Internet will have to do. Imagine me standing in your living room, bedroom or bathroom – wherever it is you’re reading this. I’m making uncomfortable eye contact and I’m speaking with EXCESSIVE VOLUME IN MY VOICE. ARE YOU PICTURING IT? GOOD. To me, the ideal game needs to have a beautifully complex RPG system hidden behind a veil of adorable critters, just waiting to be discovered and mastered. Pokémon Battle Trozei isn’t complex, but it can definitely be a lot of fun in short bursts and it’s cool to see a game featruing every single Pokémon. Puzzle masters may need to look elsewhere for something that will keep their attention for a long period of time, but if you want to put some of your Pokémon knowledge to use outside of a conventional game, then you may want to file this game as the exception to the “no spin-offs” rule like I did. Thank you for imagining me in your home. It was just as awkward for me as it was for you.