Our scene opens on a majestic fortress, perched on a tower that seems to reach impossible heights above the leafy canopy of trees. It stands as stoic sentiment to the lush and fertile land below it, and the materials and design lead us, the viewers, to believe that it is an ancestral home and that whatever family inhabits it has done so for countless generations. Inside, the family gathered around their patriarch as he gets ready to consume his Name Day feast. It is a grand feast, comprised mostly of a mighty and staggering heap of his singular favorite food, but his kin look pleased to be able to enjoy it with him nonetheless. Just as the chief celebrant is inhaling to blow out the candle on the delicious treat before him, dastardly creatures approach unexpectedly from the sea. These are conquerors born in the cold, and they use mysterious magic that has never been seen in these parts of the world before to plunge the area into a frozen purgatory that is more hospitable to them. Winter has come.

This may sound like a scene from the popular television drama, Game of Thrones, but it is also the opening of Nintendo’s Donkey Kong Country: Tropical Freeze. In it, Donkey Kong and his merry band of other Kongs must fight off the Snowmads, which are surprisingly adorable polar animals wearing precious little viking costumes. There are creatures like bloated snow owls that somehow defy gravity and hover in your path, and a sassy purple cow/goat/ox thing that you will have to trick into headbutting a wall or run off of a ledge. However, these beasts anything but precious as they descend upon the apes’ home which is now just about as frozen as the land north of The Wall.

The Good
The best elements of this game are the ones that are based off ideas from Donkey Kong Country Returns 3D. The game featured a mode called “New Mode” which made several alterations to the Wii’s version of the game to make it more accessible to players. Tropical Freeze isn’t as generous with the help it gives players, but the changes it makes to the game’s typically punishing difficulty are welcomed. Hearts, bananas (100 gets you a 1UP), balloons (1UPs) and the banana coins used to buy power-ups and balloons from Funky Kong’s shop are incredibly abundant now. Funky Kong is one of Donkey Kong’s best friends, and his shop has popped up in place of Kranky Kong’s since he’s out adventuring now. This means that even though you will probably be sending your primate pals to their death more times that you care for, “game over” screens will be few and far between. A brand new change to make life easier has been made to the mine carts and rocket barrels. In the past Donkey Kong Country games you could be careening peacefully at breakneck speeds through a dingy, humid mineshaft and hit one little pebble on the track and…BLAMO! You’re suddenly inflicted with a serious case of ”monkius mortlais”, or monkey death. The same held true if you were practicing aerial maneuvers on the ever reliable rocket barrels; if you hit something while you were riding, it was an instant death. Now you simply loose a heart just like if you ran into an enemy on foot, and the vehicle shield power-up is still available in the shop if you need an extra free hit like I almost always do. 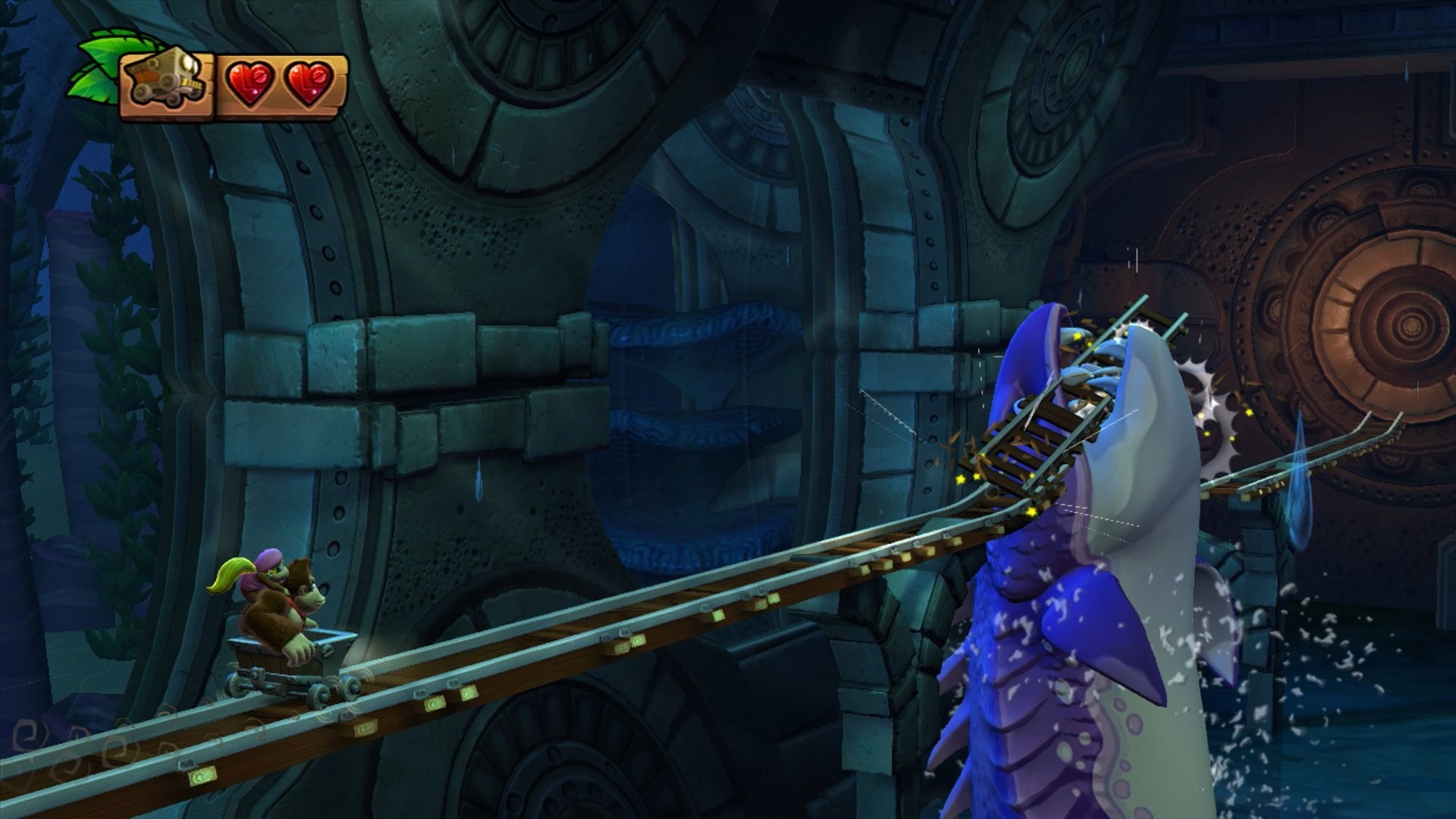 The dynamic camera in action.

Donkey Kong Country: Tropical Freeze is definitely full of the “Oooh and Aaaah” factor we look for in video games these days. Each time you being a new level you will “oooh” at the vibrantly colored and highly detailed environment you are romping in. The lush jungle comes to life on your television screen, with just the right amount of cartoon whimsy to bring a smile to your face. The “aaahs” will come later as you realize just what the heck Nintendo was talking about when they were talking about a “3D dynamic camera” when they were plugging the game. As you smash and bash your way through piles of adorable, evil critters there will be times when the camera pans dramatically around you to show a different angle. When racing through the aforementioned mineshaft, the camera may suddenly swing around behind you to show you the divergent tracks up ahead that you must alternate between by jumping the entire mine cart. Not only is the camera always at the perfect angle at just the right time, but it also allows players to see even more of the meticulously crafted world of the Kongs.

The title of this game would make it easy to assume that all of the levels will have some sort of icy motif going on, but that’s not the case. In the intro scene we see that the Kong family have been blown off of their home island and have landed in an entirely different chain of islands. They then spend most of the game traveling through areas with terrain as varied as the Seven Kingdoms of Westeros, with themes such as Autumn Heights which will leave you yearning for a pair of lederhosen, Bright Savannah with all of its Lion Kingy goodness or the ever moist Sea Breeze Cove. While you work your way through these unique vistas, you will have the opportunity to become more acquainted with each new Kong’s abilities. Cranky Kong is surprisingly spry for his age, and can bounce around on his cane in a manner that seems incredibly wild and unmanageable at first, but is invaluable once it’s mastered. Dixie Kong can twirl her pony tail to float a small distance, and she gets a slight boost in elevation at the end of the float. Diddy remains unchanged, and can still use his rocket pack to jump further and has a peanut popgun that works just like Kranky’s denture gun and Dixie’s gum gun. Playing the game with two players is a little frantic, but with good communication between teammates it is quite fun.

Donkey Kong Country Returns featured a few branching paths and secret exits within its worlds and levels, but the maps in Tropical Freeze are outright lousy with them. Many of them are deviously hidden past the level’s goal barrel or deep in water you wouldn’t normally think about swimming in. Due to the new complexity of the levels you will get a lot of replay value out of this game, especially if you’re playing it alone. You will need to go back frequently with different partners to make it easy to reach each hidden puzzle piece and “KONG” tile collectible, which are both make new appearances in this game. Collecting them all unlocks cool things like virtual dioramas. 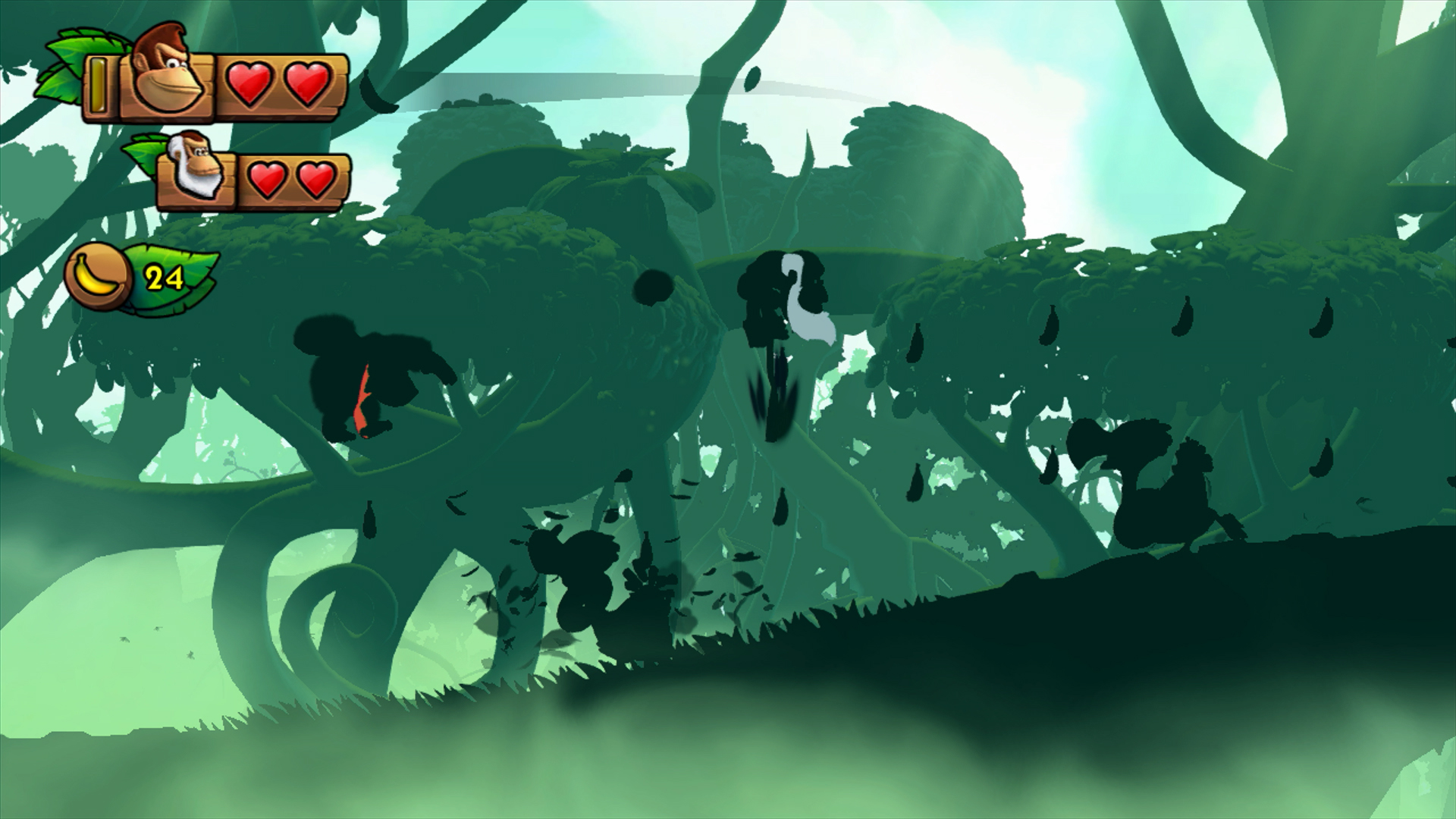 The silhouette motif, a fan favorite from Donkey Kong Country Returns, makes a much welcomed return.

The Bad
Just because steps have been taken to make sure the average ape doesn’t rip all the fur off of their body in a fit of rage doesn’t mean that all of the challenge is gone from this game. Up until a certain point in the game’s progression, all of the levels are completely manageable – until you get to the boss for a particular map. While it’s true that the boss should one of the hardest enemies you’ve encountered so far, the difference is so drastic that it almost seems like a mistake. It is quite possible to jump, swing and smash your way through all of the preceding levels with ease, only to find yourself loosing 30 or 40 hard earned balloons against a single obese owl with serious anger management issues. 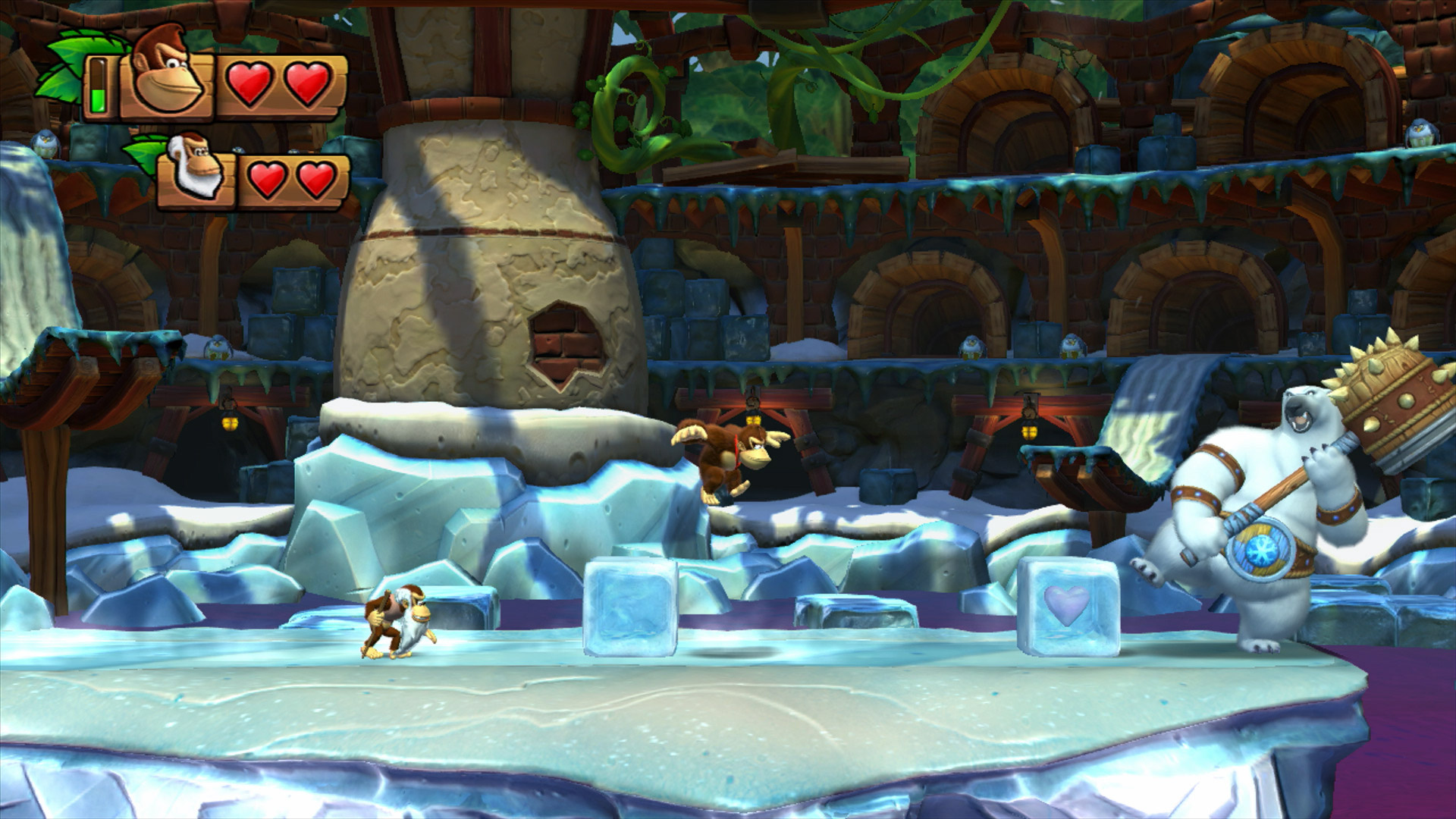 This is where the screaming and gnashing of teeth happens.

The game’s controls can also be a little bit tricky. The Kongs each have a lot of momentum once they get going, so it takes some practice to get them to stop in just the right place to avoid falling to their deaths. In co-op mode, switching player two’s character is needlessly cumbersome and loading times are insanely long, especially considering we played on a digital copy. If you’re playing with the Wii Remote and Nunchuck, it is pretty easy to initiate a roll accidentally by jerking the Wii Remote too quickly, and if you’re like me that will be your control scheme of choice so you don’t have the GamePad’s blank screen staring up at you with it’s empty, abyssal glare. There were so many things that easily could have been done with the Wii U’s unique controller, aside from just off-TV play that it is pretty annoying to see the screen black while playing on the TV.

Donkey Kong Country: Tropical Freeze may not be as thrilling or dramatic as everyone’s favorite fantasy soap opera, but for the most part it is pretty fun. Sure, there is no Red Wedding and the Yellow Wedding (in which Dixie wears a terrible yellow dress and everyone just eats a lot bananas instead of getting married) got cut from the final version of the game, but it definitely has its ups and downs. It will lull you into a false sense of security with scads of banana coins and 1UP balloons, and then throws you into a boss fight so tough it leaves you like you’ve been punched in the throat repeatedly by a professional wrestler by the time you defeat him. If you can get through these terribly tense encounters in once piece and with your sanity intact, you will get to experience one of the Wii U’s most visually pleasing games yet that has a snazzy, jazzy soundtrack by prolific video game composer David Wise to boot. He somehow manages to pick the perfect musical style to fit each situation in the game. You just need to make it to that Snowmadic ship and dish out some medieval justice to get your tropical paradise thawed out and your coconut throne back under Donkey Kong’s tushie where it belongs.