One thing I’ve never really been shy talking about is how old I am. Being 32 years young means I am older than the average gamer, but also too young to remember when home video game systems were really getting off their feet. The first console my family owned was a Nintendo Entertainment System, but that doesn’t mean the charms of its predecessor’s games are lost on me. I do have some good memories of playing Pitfall and Frogger on an Atari with some man who I am sure was not related to me, but I think of him as “uncle” anyway. He always had the best candy. Those games were ones that couldn’t rely on swanky graphics or online features to carry them; they had to have excellent gameplay design and some other sort of less gimmicky hook to keep players coming back for more.

Gameplay
VVVVVV is a game that reminds us of those gaming days gone by. Like its Atari or Commodore 64 forefathers, the beauty of this game lies in the simplicity of its core concept. The laws of gravity have been chucked out the window and our protagonist, Captain Viridian, can choose to reverse its pull at will. However, to say that the game simply involved deciding to walk either on the floor or the ceiling would be doing it a disservice. Each “room” contained in the alternate dimension the game takes place in is filled with innumerable traps and obstacles that can only be passed by creatively controlling the flow of gravity because Captain Viridian can’t jump. Every room has at least one checkpoint that you will restart from when you die, so the game’s pace stays relatively fast paced even if you’re terrible at it (like me). Each of these perilous rooms seems completely different than the last, and the aforementioned traps and obstacles are of a delightfully surreal quality. For example, one room contains “Yes Men” you must dodge, which are represented simply by the word “yes” floating about. The weirdness doesn’t stop there, and most players will be amazed by the cleverness and out of the box thinking that has been achieved in a game that has such a decidedly retro feel.

There are plenty of other things to do besides complete the main quest. Adventurous gamers can choose to seek out hidden doodads that most certainly unlock something once they’re all found, and if you complete the entire main quest additional game modes can be accessed via the menu. There is a flipped mode that makes the game harder, and invincible and slow-mo modes that make it easier. There are also quite a few new levels included in the 3DS version that didn’t make it into the original PC version of VVVVVV, so if you are the most familiar with that version there is still plenty of newness for your here.

Presentation
The game’s vintage graphic theme not only helps drive home the old school hat tip that the game hopes to be, but it happens to look great in 3D. It seems that the most simple graphics are the best for the 3DS’s unique display, because there is none of the ghosting or blurring that is present with other 3DS titles. Sound design in VVVVVV is top-notch as well, with a fabulous chiptune soundtrack composed by Magnus Pålsson. It is full of some excellent songs that are jam packed with energy, but somehow manage to not be too distracting. The music is actually one of the things that kept me coming back to the game for more and more punishment (I am terrible at it). It is very surprising how much feeling can be packed into a pile of bleeps and blops, The soundtrack has actually been released on its own under the title PPPPPP. 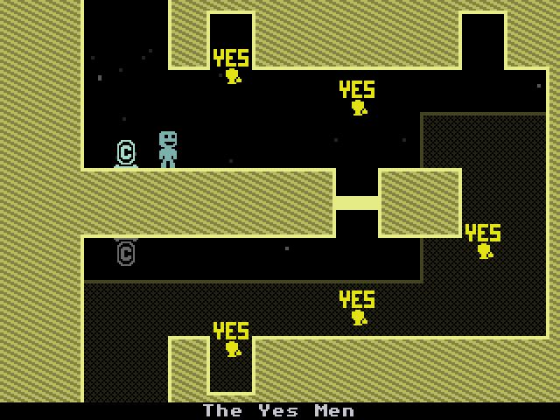 Without a doubt, the gaming industry has undergone some drastic changes just in the short time I have had my grubby little hands on a controller. We now live in an age of annualized titles, copious DLC and seemingly mandatory online multiplayer. Despite it’s nod to yesteryear, VVVVVV manages to be one of the most sophisticated and mind-bending puzzle platformers you could possibly get your hands on. It a game that not only has a jammin’ soundtrack, but also reminds us of days when every controller was wired, TVs had knobs and funny metal sticks poking out of the top of them, and we all had an “uncle” that liked to give us shoulder rubs while we played with his Atari. You had an uncle like that too, right?