The winter freeze is sticking around MUCH longer than we’d like it to. It is this time of year that I spend the most time thinking about a magical tropical getaway. Unfortunately, tropical islands are filled with terrible things: mosquitoes, smoke monsters, sea food and those itchy coconut bras that never seem to fit me right. Imagine hitting the beach with your favorite electronic book reader in your hand and you tuck your towel into the sand and unwrap your giant, novelty sized lollipop before you sit down. Suddenly, a gust of wind comes along and blows your towel up and flicks sand all over your beloved lollipop. Sensing your moment of weakness, an evil cloud of bees zips out of the tree line and swarms you due to the compromised sugary treat you are clutching in your hand.

Sound familiar? Oh, every trip to a warm vacation spot doesn’t go like that for you? Weird. Despite not being able to relate, I’m sure you can understand why one would rather create a safer version of an equatorial escape in the comfort of their own home and travel to a virtual island in order to get away from it all. With the help of Yoshi’s New Island, you can do just that. It is a game that thrusts you deep into the spine tingling role of dinosaur baby sitter/bodyguard/trusty steed. A tribe of Yoshis living on their magical floating egg island must protect baby Mario from the evil baby Bowser and his minions while helping the little tike reunite with his lost baby brother, Luigi. 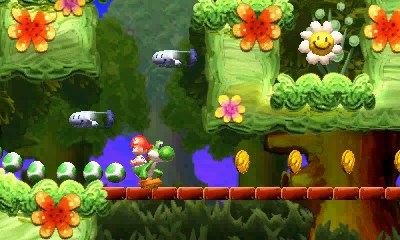 Gameplay
Essentially, the gameplay of Yoshi’s New Island hasn’t been altered very much when compared to it’s predecessors. All of the action that takes place is controlled with the CirclePad, the face buttons and the shoulder triggers on the 3DS. The touch screen is mostly just used to navigate menus or relay information to the player. The Yoshis that inhabit the island that the brothers Mario were fortunate enough to be marooned on decide to help Mario reach Luigi by relaying him across their island on their backs. They protect their tiny tot by jumping on the various enemies that may try to bring him harm, or by eating them whole and either spitting them back up at another bad guy or popping them right out their rear port holes in the form of an egg. A Yoshi can hold up to six of these eggs, and the key to success in the game will be to make sure you’re able to churn out more eggs than Hawaii has pineapples. Yoshi can then use the eggs as projectiles to nail enemies or items that are out of reach. A lot of cool puzzle action comes into play by figuring out just how to ricochet an egg off of walls to reach the intended destination. New to this entry in the series is Yoshi’s ability to generate giant eggs by gobbling up a gargantuan enemy. When thrown, these eggs have an effect similar to Mario when he’s jacked up on a Mega Mushroom – they destroy everything in their path and can potentially earn some 1UPs for the player depending on how much destruction they cause. These mega eggs also come in a metallic variety that weigh Yoshi and Mario down so they can easily travel under water. 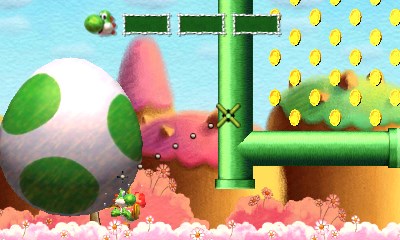 If Yoshi and Mario get hit by an enemy, Mario will start crying at the top of his lungs and float away in a bubble. Initially, you will have only ten seconds to pop his bubble before the evil Kamek sweeps in on his broomstick to whisk the poor little guy away. More seconds can be added to the countdown timer by collecting the stars that are hidden in various spots throughout each level, or by jumping through the magical sparkly star gates that also act as a checkpoint Yoshi can resume his journey from should he die. There are more collectibles in each level, such as red coins and daisies that presumably unlock cool features when you have them all, but this particular reviewer is not patient enough to grab each and every hidden goodies. If you have the time to spare and are not in a rush to complete the game, you have plenty of time to explore each and every level until you’re heart is content because the annoying timer that is present in so many platformers is not present here.

Eventually, in each level Yoshi comes to a special challenge. He must enter a magical, sparkling door where he is transformed into an inanimate object such as a jackhammer or a helicopter. I thought that a similar thing had happened to me on my last indoor tropical vacation, but it turned out I just had one too many mai tais and left my light therapy lamp on for too long. ANYWAY…in each of these miniature stage-within-a-stage (inception stage?) Yoshi gets transformed into just the right object he needs to be in order to successfully traverse the terrain. Each of these levels requires tilting the 3DS in order to control Yoshi, so you’ll want to be sure to turn off the 3D function unless you’re really good at tilting your head back and forth. Some of these inception levels are very reminiscent of other games, such as the jackhammer level carrying a very solid Mr. Driller vibe.

Multiplayer
As you beat the beginning stages of the game, you will unlock some two player mini-game challenges. These can be played with either two copies of Yoshi’s New Island or via the 3DS Download Play function which uses only one game card. Each of the challenges showcases one of Yoshi’s unique abilities, such as chucking eggs at balloons, or swallowing enemies faster than a tourist shoving shrimp into his gaping maw at a resort buffet. These games aren’t competitive, but rather require some cooperative team work in order to get the highest combined score possible. Downloading the game only took a few moments on the system that didn’t have a game in it, and it played at a good speed with no noticeable lag. None of the games are in 3D, but that is likely due to the large amount of data that would have to be transmitted wirelessly to achieve that effect. They’re a nice and light-hearted addition to the game that will add replay value for those unique gamers that have real world friends.

Presentation
The uniquely hand-drawn and colorful art style of Yoshi’s New Island immediately conjures a very nostalgic sensation, and almost instantly made me think of being huddled over a pile of construction paper in the middle of my room, surrounded by scads of colored pencils. I endlessly doodled the weird and bizarre things in my mind: an inflatable cat the size of a school bus that people could ride, or a blue-skinned hula girl with saucer sized googly eyes that ate books in order to absorb the knowledge contained within their pages. A clan of dinosaurs carrying an often-floating baby around a tropical island would have been right up my alley back then, and the looks of this game bring back all those great and imaginative feelings. That being said, the designs of the worlds in the first few maps don’t really offer much in the way of variety and can really start to blur together after a while. Most of the locales have a jungly feel, with big leafy trees and grassy ground to traipse. The main form of deviation comes in the way of just what Yoshi will be doing in the level. Sometimes he will be jumping across an abyss with only baloons to plant his feet on, other times he will be struggling against Lakitus that want to destroy the very ground beneath his feet. The music is good as well, though like the visual and level design choices, the variety of themes contained within the game’s soundtrack is relatively limited. Mostly the tunes sound like Merry Melodies anthems, which is totally fitting for the game’s overall theme it just tends to be a little forgettable.

It doesn’t take a genius to realize that going outside is incredibly dangerous. Aside from the obvious risks like skin cancer from overexposure to the sun (and lack of sunscreen), Lyme disease or falling meteorites you also have downright tragedies like bees attacking your lollipop before you get a chance to taste it. Luckily, guiding Yoshi and his friends through their floating egg island isn’t nearly as perilous, at least for you. The inhabitants on Yoshi’s Island have nothing but a ton of eggs to fend off an endless barrage of attacks from volcanic Piranha Plants, Shy Guys and that dastardly Kamek, the Magikoopa. However, you will be delighted as you journey with the tribe called Yoshi because their world is one full of color and hidden treasures that will capture the imagination of the colored pencil hoarder you probably have lurking deep within you.