In an expansive temple, a young woman bows her head in prayer before an enormous hovering crystal, which appears to be the only source of light in the room. Within moments, an inky blackness wraps its misty tendrils around the crystal and stains it dark. It is in that same instant that a giant chasm opens up in the earth and swallows a nearby village whole, leaving but one survivor. That is where you, the player, step in. You must guide this sole survivor as he assembles his ragtag band of heroes to fight back the blight that has consumed this crystal and its three counterparts, because those crystals are essential for keeping the world in one piece. There are scads of twists and turns and surprises in the story that we will have to glaze over here to avoid ruining the fun for everyone else. If by now you have guessed that we are talking about the introduction to a Square Enix game, you are right. Despite the fact that their newest game, Bravely Default is riddled with tropes that Square Enix themselves helped create, this is a JRPG that brings a whole lot of newness to the genre.

Gameplay: Combat
The way Bravely Default handles combat is what immediately sets it apart from other JRPGs. On the surface, it is standard turn-based RPG fare with the characters that hold the highest speed rating taking their turn first. However, this game takes a huge deviation from the formula with the “brave” and “default” system, from which it gets its odd name. Players who select “brave” can use up a future turn, allowing them to make up to four moves at once. The drawback to this is that you must sit out an equal number of turns on the next round and take whatever damage is thrown your way by the enemy’s party. Choosing “default” allows that character to not make an action for that turn, take considerably less damage, and store up a battle point that is needed to make a move on the next round. Imagine you’re entrenched in a battle with a giant, imposing minotaur. Usually in a turn-based game you select either an offensive or defensive move and then wait to see if you get impaled on the beast’s horns or if you successfully smite him with your mage’s fireballs. In this game you can take a chance and borrow three additional turns from future rounds and hammer that man-cow with four fireballs simultaneously! It is a high-risk method of battle, but if used correctly it can really pay off.

This new combat system adds a whole new interesting layer of strategy to the game. Depending on the enemy, you may want an all-out assault or you may be better off pacing yourself so you’re never left defenseless. Once you have your full party assembled, you will probably find yourself “braving” with a couple of offensive characters while taking single turns with your support characters so that the entire party is never left defenseless at any one given time. There are even some moves that can only be used with a battle point in reserve, so defaulting will be necessary from time to time if you want to use your character’s full moveset. There is an extensive demo available for the game right now on the eShop, so you can get your feet wet with this new system before deciding if you want to commit to buying the full game.

Gameplay: Job System
Anyone familiar with games from the Final Fantasy franchise will not be surprised to find a job system in place in Bravely Default. I personally only have a light passing knowledge of Final Fantasy games, so learning the ins and outs of the system was a new and fresh experience for me as well. When you first start out the game, you will only have the “Freelancer” job available, which is essentially a jack of all trades type of job. As the game progresses you will unlock additional jobs, which basically serve the same purpose classes do in other RPGs. White and black mages specialize in healing and damage-dealing magic respectively, thieves which have enhanced movement speed or a monk that deals with hand-to-hand combat. As you win each battle, not only will you be awarded the typical money and experience point rewards, but you also will receive points towards increasing your level in the current job. As the job levels up, new abilities specific to that job unlock. What’s really spiffy about these job-related abilities is that once a character learns them, they can access their unique skills as a secondary ability no matter what job they use. A monk who has spent some time as a black mage will be able to cast a fire spell, or a knight who has leveled up as a white mage will also be able to help keep their party healed. As you work your way through different jobs with each character, you will be able to make a ton of interesting and useful ability combinations.

Gameplay: Social
Bravely Default is the first game I have personally played that seems like the social features of the 3DS are fully utilized. StreetPassing with someone who is also playing the game lets you utilize them in the rebuilding of Norende, the aforementioned village. By rebuilding the village to its fullest potential you give your party easy access to items and equipment, so it’s worth your while to spend some time on this facet of the game. If you’re not lucky enough to be landing a lot of StreetPasses, you can also invite strangers to help build your village through the Internet. Once a day you can send out an invite and people will gladly populate your village and lend a hand in its reconstruction. Not only can you force your friends and neighbors into backbreaking manual labor, but you can also summon them into battle to perform a special attack, which could totally save your bacon if the going gets tough.

The game almost looks this good.

Registering Friend Codes of another person working through the game also offers some unique benefits. Once they have been registered, you can use the game’s “Ablink”, which is a portmanteau for “ability” and “link”. The way it works is pretty cool: if you have a friend that is a more advanced black mage than you are and you initiate an Ablink with him, you will have access to all of his black mage’s abilities. This adds yet another layer of strategy when considering how to set up your party and makes it a rather interesting process without being overly complex or convoluted.

Presentation
Visually, Bravely Default gives off a vibe of an old and well-loved story book. Towns and backgrounds have a nice hand-drawn look to them and a slight sepia wash to give it a nostalgic twist. The character models are even proportioned in a strange but appealing way that makes them look a bit like cartoon characters, but it is an aesthetic that helps lighten the mood of the game which could otherwise be considered rather heavy. There are quite a few moments when the camera will pull out or change angles in a delightfully unexpected way and give you a totally new perspective on an area and give the game a truly cinematic feel. 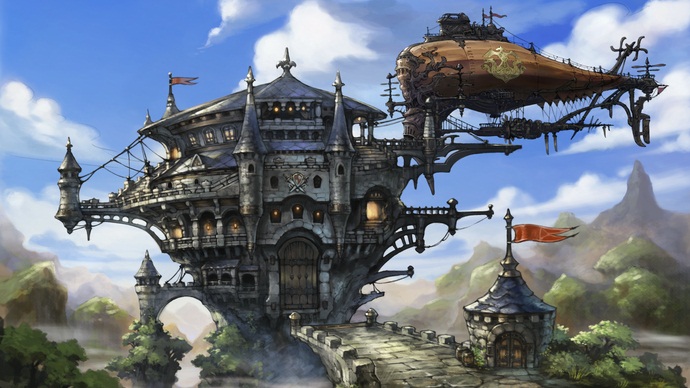 The world of Bravely Default is something Square Enix has shown us before, but that doesn’t mean it’s any less fun to look at.

The sound design in the game is pretty impressive as well. There are sweeping, adventurous orchestral pieces, malevolent, dark tunes and creepy ambient music for crawling through a dungeon. Nearly every single piece of dialogue has received a voice acting treatment as well, which is something that is all but unheard of these days in a handheld game. There are a few times where the emotive qualities of one particular actor’s voice are hokey and grate on the nerves, but they are few, far between and well balanced by the rest of the game’s positive qualities.

If you’re like me and have merely dipped your toe in the expansive pool of Square Enix RPGs, you might have looked at Bravely Default and thought it looks like Final Fantasy with a different coat of paint on it. While it’s true the two games do have a lot in common, Bravely Default is an epic, deep and complex RPG with more layers than one of those blooming onion appetizers. Once you start peeling away these layers of inventive combat, a nifty job system, innovative social gaming features and an endearing presentation what you’ll be left with is a game that takes new approaches to a lot of old ideas and gives you and experience that feels remarkably fresh yet familiar at the same time.