Picking out a new pet can be challenging, especially when it comes to KITTIES! They’re all so cute and fluffy and full of love and snuggles and glitter and rainbows. The biggest problem is picking one that is a good personality fit for your household and is aesthetically pleasing. Some people are better suited to a docile lap cat, others would rather have a feisty cat that can’t stop playing with everything it finds that even remotely resembles a string. You have to decide if you prefer something exotic like a hairless cat, or a conventional striped tabby. Or perhaps a cat in more of a pink hue with a airy, almost floaty personality is more your style. Maybe one with an affinity for spectacular jewelry, corsets and petticoats? Such a fabulous feline may not exist in the real world, but in Super Mario 3D World it is a very real possibility.

Gameplay
The title of Super Mario 3D World can be a little confusing, especially when compared to its 3DS exclusive predecessor Super Mario 3D Land. The game isn’t in true 3D; the graphics don’t “pop out” at you but the game does play in a 3D environment. Players control Mario, Luigi, Peach and Toad as they use their unique skills we haven’t really seen in a game since Super Mario Bros. 2 Mario is balanced, Luigi gets to use his trademark lofty jumps, Peach is a little on the slow side (due to her voluminous skirt no doubt), but she gets to float for a couple seconds after she jumps. Toad has the shortest jumps, but he can also run the fastest.

Mastering each character will be a big challenge for a lot of players.

Like my friend David said about Super Mario 3D Land, Super Mario 3D World feels like the most natural evolution of the Super Mario franchise to date. Each world is laid out with multiple paths and you must take the time to explore each one to get the most out of the game. Finding an alternate exit will open bonus stages or shortcuts through the map. Like all other modern Mario platformers, players will have the option of collecting three hidden stars in each main level; some bonus levels have more than three stars you can get your paws on. These stars aren’t as much of an option as they have been in the past because some levels will require a certain amount of stars to unlock. As long as you at least grab all the ones you see in plain sight you should be okay though. In addition to these stars, there is a hidden stamp to find in each level which can then be used to decorate your Miiverse posts.

The Power-Ups
It’s been known for some time now that the new hook for Super Mario 3D World is the cat suit power-up. A surprising amount of work went into the development of this ability. Each and every level in the game has been built with the cat suit in mind, with high and vast walls that can only be scaled with a clawed protagonist. Even more advanced players will be hard-pressed to find a way to reach certain stars or stamps that doesn’t involve the cat suit. Besides being able to climb, Mario and his gang can maul enemies with a swipe of claws, and do a cool aerial dive bomb attack. These new feline abilities are so useful, in fact, that sometimes it feels like you’re cheating by clawing your way along a direct path to something that otherwise would have taken numerous carefully timed jumps. Even enemies like Goombas and Bullet Bills will get into the super kawaii action of donning a cat ears and tail.

Classic power-ups make encore appearances in 3D World. Fire Flowers, Mega Mushrooms and Tanooki Suits are back, as well as more recent additions to Mario’s arsenal like the Boomerang Flower. This hardly means things will feel stale, because each power-up combines with the character’s unique ability to make something totally different. Peach with a Fire Flower can hover above enemies and rain fiery death down upon them, or in a Tanooki suit she can clear ridiculously long gaps because of her own floating ability combines so nicely with the Tanooki’s own.

One more new power-up deserves some attention: the Double Cherry. Each time you grab one of these your character will be cloned. You can keep grabbing cherries to produce more clones, and each clone you make has the same power-up as the original. It is quite possible to have gang of Marios spraying fireballs at everything in sight. It’s a fun trick at first, but trying to navigate four or five princess kitties into the same nook or cranny to get some hidden morsel is nearly impossible and gives a very frantic feeling to the game.

Multiplayer
Considering this is the first 3D Mario game to offer a multiplayer option, 3D World did everything right. The manic, rushed feeling of the multiplayer mode in the New Super Mario Bros. series is gone. Item blocks that contain power-ups will now spit out one for each player that hits it, instead of a batch of them all at the same time. It is no longer necessary to pick up your co-player and throw them into a pit of lava to get your favorite item. That’s not saying things still won’t get a little competitive! Players share the same pool of lives and have a joint score, but each character gets scored separately behind the scenes. The player that has the top score at the end of the level gets to wear a crown for the next level which does nothing except give you something to brag about.

I laugh every single time I see a Koopa in their undershirt.

To support the multiplayer mode, you can use any and all controllers ever made for the Wii or the Wii U so finding something to allow your friends to play with you should be no problem. One player should definitely commit to using the GamePad, because there are special features that can only be accessed with it. Blowing into the mic can reveal hidden item blocks, blow stuff out of trees or even knock enemies like tiny Goombas off the map. Some levels even require the player with the GamePad to manipulate blocks and platforms to allow for progression through the level. The multiplayer mode isn’t really much different than the single player mode in most regards, and the only real drawback to it is that players loose the ability to freely control the camera that they may have enjoyed in a single player setting.

Before moving on from multiplayer discussion, we need to talk about “the bubble”. Since the inception of New Super Mario Bros. Wii‘s multiplayer mode, there has been a mechanic that allowed one players that were in trouble to enter into a safety bubble that allowed them to float through obstacles and enemies to join their partner or partners. This bubble could be activated at any time, so long as at least one player was not in the bubble. This had numerous uses outside of just saving your bacon, such as jumping down into a pit to grab a difficult to reach Star Coin and then floating safely back to your partner. In 3D World, this feature has been extremely crippled because one can only enter the bubble when they are actually standing on ground.

Presentation
It goes without saying that Nintendo isn’t shy about putting a bright coat of paint on flagship titles like the Mario games. What really makes 3D World stand out visually is the intense level of detail put into the levels and characters. Realistic lighting helps give the world depth that it would be otherwise missing. Textures like fur on kitty suit clad creatures and individual snow flakes weren’t really necessary, but they were added anyway. It is obvious that the games designers took a lot of pride in this title and really wanted to make it stand out as one of the most meowvelous Mario titles seen by players to-date.

One of the really special things about Super Mario 3D World is that you never see the same kind of world twice. Each overworld map has a visual theme to it such as a jungle or desert, but the levels littered upon it will not necessarily fit into that theme. That is a good thing because you’ll never really know what to expect until each world is revealed on the map. There are even some unique puzzle oriented levels that feature a miner Toad. Toad can’t jump so you have to rotate the camera frequently to see new paths to take him on to reach all the stars. Bosses have some very interesting designs too; my personal favorite is Hisstocrat who is a very regal looking snake that has a design that is reminiscent of a Super Mario Galaxy boss. 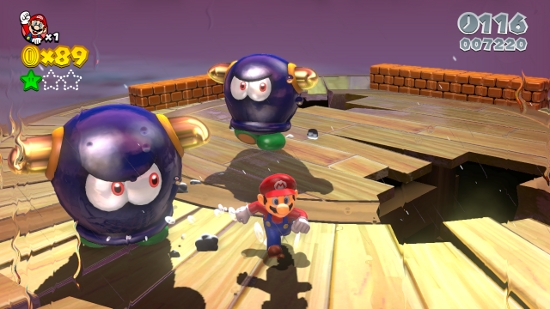 Rain on the camera lens is just one of the many cool effects the developers used in the game.

While pouncing from level to level you will be treated to some of the most fabulous Mario music you’ve every laid your ears upon. Each track is fully orchestrated and you will hear delightful smooth jazz on the beach and spooky Tim Burtonish music in the best ghost house you’ve ever played. CD version of the soundtrack is going to be made available to Japanese Club Nintendo members and I could seriously see myself importing it if it doesn’t look like it will be made available to Americans.

Choosing a game to buy is just as hard as picking a furry friend to join your home. There are so many options, and you only have room in your house for a few games and litter boxes. Considering the amount of time and money you will be investing it both it is necessary to be a little picky. Chances are if you have played video games you have played a core Mario title and have a favorite one. Don’t think I’m joking when I say that Super Mario 3D World is better than your favorite Mario game. It has a great multiplayer mode, cute and gorgeous graphics, amazing music and lots of CATS. Even if you’re one of those weird people who thinks dogs are better than cats, or Sonic is better than Mario, once you put your hands on this game you won’t be able to deny that it is one of the most purrrrfect platformers you’ve ever played.