Picture it: a dark Sunday night and the stormy sky is the murky color or an Irish stout. I’m sitting in my old red pickup truck in the parking lot of a church, trying to calm my nerves just a bit before I head in. I have heavy purple bags under my eyes and my beard, while still maintaining its normal burly magnificence is looking unkempt. This isn’t my first meeting, but it’s been a while since I’ve been to one and I’m nearly shaking I could use a fix so badly. The building looks like it’s abandoned, but a hazy yellow glow comes from the basement windows that surround the building’s perimeter.

After I draw my coat close to me I jump out of the truck, slam the door, and make my way to the set of stairs that leads to the church’s basement. I try the handle a couple of times and it seems like the door won’t open. Maybe I should go look for a small key…” I thought to myself, but quickly shook off that idea as being preposterous. Finally, after a few more jiggles of the handle the door gives way and I take my place on one of the depressing metal folding chairs that sit in a circle in the middle of the room.
”Hello, my name is Aron and I’m a Zeldaholic.”

Zelda addiction is something I’ve been struggling with for nearly as long as I can remember. I’ve played every Zelda (except those which must not be named) and I have loved them all, but the one that holds a special place in my heart is A Link to the Past. It would be quite easy to say that there was a long period of my life where I was more than just addicted to it – I was completely completely obsessed with it. As soon as I completed it, I started a new game in the second save file slot. I would repeat the same process until the slots were full, then I would delete them all and start again. So it should be pretty easy to imagine my delight when it’s sequel, A Link Between Worlds was announced. I knew I would have to have it. I knew this because one of the classic signs of Zelda withdrawal (your eyes twirl around in your head and point different directions) was setting in already just at the mere thought of not being able to play the game.

Gameplay
The Legend of Zelda series is one that is infamous for being incredibly formulaic, and it is for that precise reason that it is more habit forming than slicing down every single blade of grass to find Rupees. It is very relaxing to jump into a game and have a very cut and dry idea of how to go about completing your main objective. Typically, our hero Link would travel to a dungeon and find a special item or weapon that would be required to make his way through the dungeon. For example, in a dungeon filled with numerous chasms and platforms Link would come across the Hookshot, a series staple that works sort of like Batman’s grappling hook. This approach to constructing a Zelda game worked well for a long time, but it caused for each game in the series to be incredibly linear. The developers tried to break this linear approach with Skyward Sword, but all we really got was a game-breaking bug. Finally, they have found the right way to break this vicious cycle. 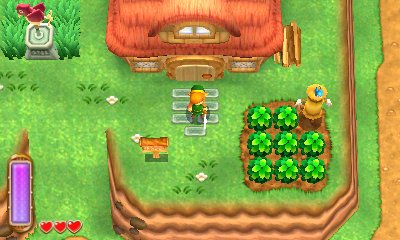 Now, instead of finding items like the Hookshot or Boomerang in a dungeon, you can simply rent them from a character named Ravio. He is a very friendly fellow clad in a purple bunny costume that takes a liking to Link’s home and sets up a shop there. In this shop, you can rent the crucial gear needed to access each dungeon. The rentals fees are pretty cheap, typically less than 100 Rupees, but if you happen to fall in battle these rented items will be whisked away from you. You must then go back to the shop and re-rent them. However, if you can cough up the cash to purchase them you get to keep them even if you end up being not quite the master swordsman you thought you were. This system probably sounds strange to most veteran Zelda players, but what it does is free you up to tackle each dungeon in whatever order you choose. If you run into a boss that’s particularly rough, you are able to go try another dungeon and build up your heart meter before you come back to try again.

It is now very easy to get hooked on some of the more powerful items early on, because not only can you access them early in the game but they are no longer reliant on a magic meter for power. Now there is simply an energy meter, which fuels everything from the almighty Fire Rod to your bow and arrows, so the days of endlessly hacking down grass and bushes for arrows and bombs are gone. This energy meter is also responsible for fueling Link’s new ability to transform into a two dimensional version of himself and move along walls.

This new ability may seem a little far fetched, but the reason for it is integral to the game’s plot and it ends up being pure genius. Almost every room in every dungeon that seems impassable can be conquered by using this new ability. Every single time I got stuck in a room and was quietly cursing the fact that there would be no help for me on YouTube yet, I would realize I hadn’t yet tried moving along all the walls. Walls aren’t the only thing that you move on, and there are some brilliant moments when this new capability of Link’s comes into play. These sorts of situations were very challenging, but the game’s designers were kind enough to lay out clues to the path that should be taken in the especially tricky areas. This isn’t to say that the days of lighting four torches to open a door are long gone, it’s just that the elements of puzzle solving that have become Zelda tropes have been minimized in favor of these new methods. 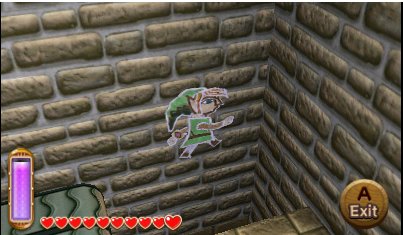 Not any weirder than a talking magical hat, really.

Speaking of dungeons, the day of blindly groping your way through a dungeon until you find a map are long gone. As soon as you enter, the entire layout of the dungeon is freely displayed for you on the 3DS’s lower screen. You will still need to find the Compass to see all the locked doors and treasure chests, but the real challenge to navigating the labyrinthine fortresses the world’s various monsters are holed up in comes in the devious puzzles presented by many of the rooms that you will have to solve in order to progress. 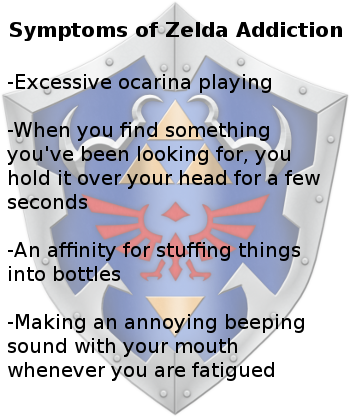 control Link. Meeting new characters, learning their idiosyncrasies, exploring new and distinctive dungeons, investigating every nook and cranny of the ever shifting Hyrulian landscape and uncovering its dormant secrets are the things that endear these games to countless players over the decades. These aspects are too precious to spoil for a Zelda gamer of any age and this hasn’t changed with the creation of A Link Between Worlds. The mirrored kingdoms of Hyrule and Lorule contain humor, sadness and intrigue. There is a new main villain with mysterious motives, a new princess, a witch on a flying broomstick, and a certain iconic item from a past Zelda game makes a mysterious appearance. Such care was taken to ensure this game would be easily associated with its predecessor, but there are a ton of unique aspects to make distinctive like the new in-game hint system that utilizes Play Coins, the inventory management has been redesigned and for the first time ever you can tackle many of the tasks at hand on your own terms.

Presentation
When we were talking about a 3DS game’s visuals a few years closer to the system’s launch, we either would be oohing and aahing over the 3D effect, or proclaiming how it’s underwhelming and we could live without it. I am often the first to admit that for most games I would rather have the 3D turned completely off. However, in A Link Between Worlds, the 3D effect is nearly crucial to being able to fully understand how to navigate the world you’re exploring. In fact, this is one of the only games that I will not play in 2D. It doesn’t hurt that it is one of the few games where I can’t find any fault with the effect, and it looks like it is running at a full 60 frames per second which is a rarity for 3D mode on any 3DS game. 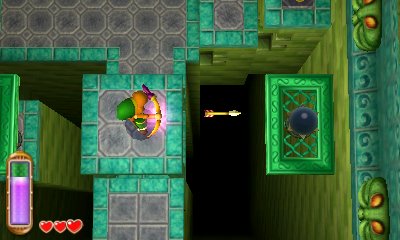 Even with the 2013 twist on the visuals and the awesomeness of seeing my most beloved and familiar versions of Hyrule in 3D, Nintendo was very careful to make sure A Link Between Worlds is tied closely to A Link to the Past. The exceedingly bright color palette is something that hasn’t really been seen in a Zelda game since it’s Super Nintendo days and the general aesthetic is one that will delight fans that have even the slightest amount of nostalgia for those days. This tie to game’s predecessor is solidified by the impressive musical score of the game. Perfected, orchestral sounding versions of classic Zelda songs make an appearance, as well as a ton of classic sound effects that have been tweaked so they feel right at home in the current generation of gaming. However, it would be a mistake to think that this game is simply an old one with a fresh coat of paint slapped on it. It is an entirely new and wonderful experience that is sure to cement it’s place as one of the most beloved games within the franchise.

Don’t worry if you feel like you are in the thrall of a Zelda addiction. There is help for you out there, but the first step is admitting that you have a problem. The real problem with Zelda addiction is simply not having enough hours in the day to spend exploring Hyrule. That’s why I’m so happy that I found my Zeldaholics Anonymous support group; spending a few hours a night in a church basement with like-minded individuals immersed in the Zelda universe is really the only way to scratch that particular gaming itch. That itch is especially hard to ignore when it comes to The Legend of Zelda: A Link Between Worlds. It has just a strong enough connection to the past to keep older players like me firmly in its nostalgic grip, but is so new and different that it will seem fresh and is easy to approach by new players. It contains absolutely everything you could ever hope for from a game in the Zelda series.