As you creep slowly up the walkway to my house, with the hem of your bed sheet ghost costume dragging on the pavement, you can’t help but feel a little anxious. There is low-laying fog everywhere, and strange lights peering out from behind my perfectly manicured topiaries. A noose swings from a low branch, clutching the neck of a shadowy figure in its snare. ”That’s only a dummy, right?” you say aloud to yourself. You’ve known me to be a little eccentric at times, even outright flamboyant, but never murderous. You choke back the bubble of fear in your throat as you reach for the doorknob, but stop just short of grabbing it when you hear strange and unearthly sounds coming from my living room…

…”I’ve got the eye of the tiger!” comes wafting through my partially opened door and you realize that rather than being mauled by a zombified Katy Perry fanatic, you are actually in for a treat: because it’s October and it’s time to play some Just Dance 2014!

Maybe you have been living on a deserted tropical island without Katy Perry (which would be cruel and unusual punishment), or maybe you live in Australia where most video games are illegal, but there are bound to be a few of you out there who don’t have any idea what a Just Dance game is. This is a game that makes you get up off of the couch and shake what your mama gave you with a Wii Remote in your hand. Successfully mirroring the moves from the animated dancer on your TV screen will earn you points and allow you to unlock new and potentially VERY embarrassing things you can do while playing the game.

The Good
This isn’t to say that Just Dance 2014 is the same ol’ trick-or-treat bag of tricks. This year, when you are loudly singing how you live for the applause, it will actually matter as long as the Wii U GamePad is close enough to register your voice because you will get a karaoke bonus for singing. Unfortunately, there is no way to enjoy the karaoke feature without someone who is willing to dance for you, so you will have to either do double duty or find your own private dancer. Aspiring vocalists will be delighted to discover the lyrics for each song can be displayed on the GamePad so you don’t have to squint at the TV to keep up. 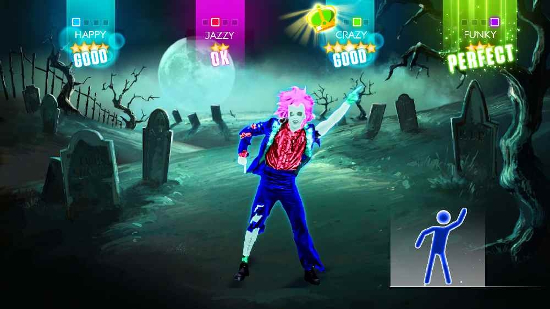 A zombie version of “I Will Survive” is just about as perfect as you can get.

Another fairly new-ish feature that reappears in this year’s title is the Party Master Mode. One player gets to use the GamePad to select the next move for a dancer or group of dancers. There are also a few opportunities to change the song abruptly in the middle. If you’re a veteran player this will definitely add a new level of challenge to the game, as well as provide a way for your self-conscious and awkward friends to join in on the fun.

A surprisingly awesome online mode is included in this year’s entry to the franchise. You join a large group of dancers who are all simultaneously dancing to the same song. The song being played is usually chosen at random by the server, but occasionally dancers are given an opportunity to vote. Each star you personally earn out of the five potential stars ends up in a community bank. Once a certain level of stars is reached in the bank, new songs are made available to the online mode. These songs get played one after another with very little time in between, so it is incredibly easy (and incredibly fun) to get stuck in this mode. What’s interesting about this is that it is mostly a cooperative experience, but you also get ranked against people in a small party of four and against all dancers competing worldwide. Fame can be fleeting, however. I personally went from second in the world to thirteenth in the span of only one song.

Also in the area of online functionality is Just Dance TV. Players can set up the GamePad to face them while they dance and the game will record a 30 second clip of them. The clip is then edited using the “Autodance” feature to make any player look like they actually have moves like Jagger instead of moves like the Cryptkeeper. You can then freely share them via your favorite social channels or shamefully delete them before company comes over to play with you. 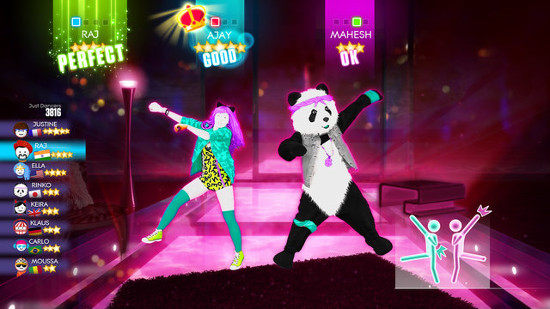 Even a Ke$ha song is redeemed by Just Dance 2014’s great online mode.

Rounding out the assortment of new gameplay options is “On-Stage Mode”. This allows a single player to take the lead dance role and two of their friends can fill in as backup dancers. There are a lot of other great changes coming to your home dance floor, like tweaks to the Mojo system, which allows you to unlock new content. In previous titles, once you obtained a certain amount of Mojo the game allowed you to spin a roulette wheel containing various things you could unlock. Now, your Mojo pool is represented by coins. Each song has unlockables, like an “intense” version or a Party Master version, and you can spend Mojo coins to unlock them in whatever order you like. These coins can also be spent on aesthetic items like avatars for your online dancing presence.

The Bad
Just Dance 4 featured a pretty expansive workout mode, which not only tracked how many calories you were burning, but also had specific workout versions of songs and even some aerobic dance sets that were exclusive to the mode. Most of these features seem to be missing from Just Dance 2014. What is being offered in its place is the ability to decide how long you’d like to workout, and to pick from a pre-made set of songs or fill in your own favorites. It’s simple and more streamlined, but it isn’t often that features are taken away from a game so it was a little disappointing. In an effort to make up for these lost features, Ubisoft has now made it very easy to count calories and other fitness related numbers no matter what mode of the game you’re playing. Unfortunately, Ubisoft has yet to figure out a way for you to clutch a bowl of candy corn to scarf down while you’re working out. You have to keep up your energy somehow, right?

Thankfully, this year my Halloween bash went much better than it did last year. Instead of inviting a handful of dorkiest friends I only invited you, my man companion and 20 or 30 Just Dance enthusiasts from around the world. No matter what console you play it on, Just Dance 2014 is going to be a lot of fun. At the bare minimum it will get you up off your couch to have some admittedly awkward fun cutting a rug in your living room. Heck, it just might even trick you into doing some exercise. Thanks again for coming to my little shindig, we sure did “get jiggy with it” as all the cool kids are saying, right? Also, thanks for not saying anything when my Katy Perry costume malfunctioned. Nothing can ruin a party quite like an unplanned nip slip!