When I was a youngin’, I used to look forward to Saturday mornings from the moment my feet hit the ground on a Sunday. All week long I’d sit around daydreaming of hefty heroes with awesome abilities thwarting vile villains’ dastardly deeds; anxiously awaiting the time when I could sneak out of bed before anyone else in the house and claim the TV as my own for a few hours. Now that cable and its many cartoon-only stations are so pervasive, the revered Saturday morning cartoon block has become a thing of the past. Saturdays mornings were a time when could sit before my very first alter of geekdom and let my mind wander in and out of the fantastic worlds that flickered to life on the screen in front of me.

Now that I’m an “adult” (I use the word loosely), I realize most of these shows weren’t the animated half hours of intensely nuanced storytelling I thought them to be at the time. Most of the good guys were just being good because the writers needed them to be, and conversely most of the bad guys really had no motivation other than “Humans are terrible. Must destroy!”. Plots were usually full of more holes than my favorite pair of boxers, and the idea of a serialized story arc was relatively unheard of at the time. Platinum Games and Nintendo have recently launched their much anticipated Wii U game, Wonderful 101, which quite easily takes my mind back to the days when cartoons were really only something you could engross yourself one day a week. In the game you will be playing the role of the +1 to the Wonderful 100, a group of 100 super heroes that are trying to stave off the invading aliens known as the GEATHJERK. 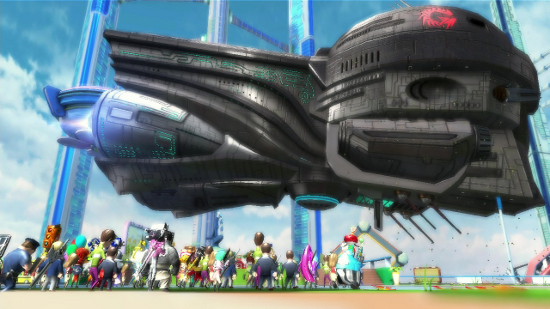 The invaders may be "jerks" but at least they have some sweet rides.

Gameplay
That’s about all the plot you’ll get for most of the game, but there’s a good reason for that. If you were being bogged down with a lot of story and cutscenes you would be completely and utterly unable to focus on the mayhem taking place within the game. When you first pick up the GamePad and start playing, it will be easy to think, “Oh, this is just like Pikmin”. The two games do share some similar concepts and mechanics, but it would be much easier to think of Wonderful 101 as Pikmin with a pinch of Green Lantern and completely jacked up on Red Bull.

You start out controlling just a few of the Wonderful 100, namely Wonder Red. As you progress through the game you will collect more members of the Wonderful 100, but as you’re questing for them you have the ability to enslave…erm, I mean “save” innocent citizens by conscripting them into your heroic horde. They get a nifty mask that gives them protection and some special abilities, but what the mask really does is allow one of the Wonderful 100 use them to form their Unite Morphs. For example, Wonder Red’s specialty is the Unite Hand, which forms team members into a giant hand he can use to do things like punch enemies, turn giant knobs to free people imprisoned in a capsule toy machine, or pick giant boogers out of a giant nose. Okay, so that last one was fake but let’s just say Unite Had has a wide array of uses. 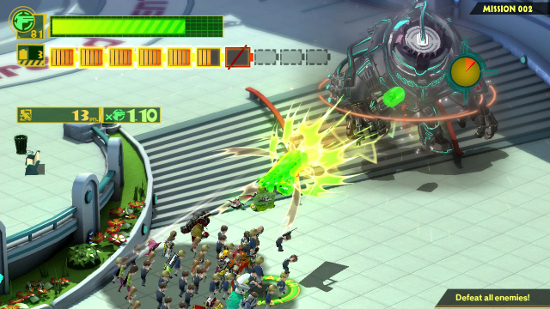 Unite Gun is handy for dispatching enemies you don't want to get too close to.

To pull off these impressive feats, the player must draw the correct shape, in this instance a circle for Unite Hand, either on the GamePad’s screen or with the right analog stick. Both of these methods have their problems; if you draw indiscriminately on the touchscreen there is a good chance you will open up a menu instead of making a circle. Drawing with the right analog stick is predictably imprecise, which will force most people to take their eyes away from the TV and look at their GamePad to see what they’re doing. Given the frantic nature of the action, this is pretty annoying but by no means a deal breaker. When things get really wild and you’re finally feeling comfortable with the game’s control scheme, you can split your team up into separate groups, each with their own morph to rack up your combo score and deal the most damage.

The GamePad doesn’t just get used to frantically draw shapes, but also in some unique ways that highlight the “asymmetrical gameplay” we all keep hearing about in regards to the Wii U. When exploring the interior of a warehouse, all of the action involving the Wonderful 100 shifts to the GamePad screen. When they are ready to exit the warehouse, Wonder Red must use unite hand to twist dials on a combination lock whose display is only visible on the exterior of the building, which is still in view on the TV screen. There are other interesting ways the Wii U’s unique controller gets used in the game, and it is these twists in classic video game formulas that make this feel truly like a game that’s never been done before 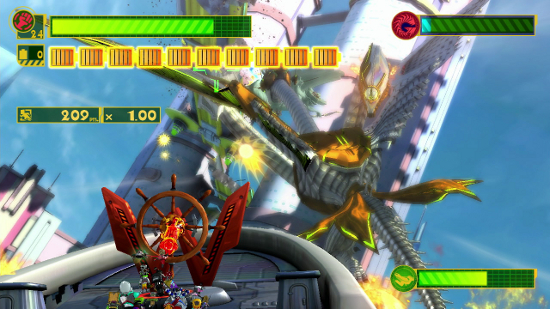 Shooting a two headed cyborg dragon while flying through a debris field SHOULD be fun, but it feels more like a chore.

There are essentially two types of scenarios that can happen in Wonderful 101, either the group is fighting mobs of enemies or they are involved in vehicular combat in some way. Fighting mobs of enemies is actually pretty fun, and seems like the type of play this game was built for. It definitely gets a little hectic at times, but overall it’s a pretty good time. Where the fun factor begins to slip a little is when the game decides to stick our intrepid gang of heroes on something like a spaceship or train that they must pilot while they are also trying to drive back the GEATHJERK invasion. One of the earliest examples of this is when Wonder Red must use Unite Hand to steer and old timey nautical steering wheel on top of an otherwise state of the art spaceship. Occasionally the boss you are shooting will fling a gelatinous blob at you which covers the steering wheel and requires you to switch to Unite Sword to slice it off in order to resume control of the ship. The constant switching back and forth between morphs only to lose control of the ship that you have to steer around debris, all while shooting at a giant two-headed robotic dragon was more frustrating than The Uncanny X-Men being preempted when the Saturday morning news ran long.

There is a good chance that, even on the Easy difficulty setting, you will lead the Wonderful 100 to their wonderfully wacky deaths more times than you can count. To act as a counter balance to this, the developers have given players unlimited continues. When you hop back into the fray completely healed, the alien monstrosity you were duking it out with will retain all the damage you previously inflicted upon him. This definitely helps lessen the likelihood of a ragequit in some of the more challenging fights, but it also cheapens victory a little bit because anyone with enough patience and persistence can take down a boss. The only real motivation to carefully and efficiently fight is to get a higher ranking at the end of your mission.

Gameplay: Multiplayer
Wonderful 101 comes with a neat and tidy multiplayer mode along with the standard single player campaign. Dubbed “Mission Mode”, it is actually playable solo. There isn’t a whole lot here that’s different from the core gameplay, except the fact that you can bring along up to four of your real-life friends. When someone joins you, they will need to use a Wii U Pro Controller or a Classic Controller from the Wii.

Each player is given a small group of Wonderful Ones to lead into the fray. While the missions are ultimately a cooperative effort, at the end of each one scores are issued to individual players based on how much damage they dealt, received, and what their combo score was. What’s really fun about Mission Mode is that you get a group that has access to all of the main morphs, so you can experiment with some of them even if you haven’t yet earned them in the single player mode. 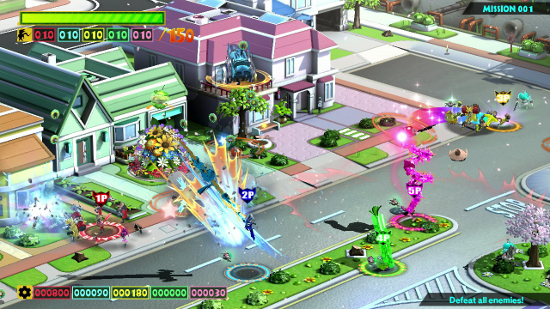 Multiplayer is a fun hybrid of co-op and competitive play.

Presentation
The world of Wonderful 101 is an incredibly bright and vivid one, just like we would expect from a world of superheroes. The heroes themselves are all incredibly shiny, which was a little off-putting at first but they are “electroplated” so the sheen on their costumes is probably to give the impression of armor. As a budding tokusatsu fan, it was really fun for me to watch the main characters go through their henshin sequences, which very blatantly draw inspiration from the Japanese Super Sentai shows that have been airing over there for nearly four decades. In order to access their super powers, each hero calls out “Wonder-Eyes” and their Wonderful 100 code name. The scene then cuts to the hero in question activating the pendant on their neck and then doing a series of dramatic, heroic poses as their armor settles in to place. There are other nods to this aspect of Japanese pop culture as well, like how most of the enemies are mechanical in design, and quite frequently gigantic in size.

The music in the game helps further the vibe of a light-hearted action cartoon. The main song that plays during a major fight is so delightfully campy and over-the-top that you won’t be able to stop smiling when you hear it. Overall the whole score has a really great cheesy tone you will love instantly as long as you’re not trying to take it seriously. With the exception of a couple characters, the voice acting is decent – even the hammy Wonder Green and his ridiculously phony French accent.

The desire to foil felonious fiends is something that has burned in the heart of many gamers for as long as they can remember. Wonderful 101 is a game that will easily take you back to a time when you sat in front of the TV in your pajamas, clutching a mixing bowl full of cereal, fantasizing about what super power you would get and just how you should go about getting it. This is a game that doesn’t burden players with a lot of complicated plot because it doesn’t need to; it’s all about an extraordinary group of people doing amazing things to protect their planet from a bunch of extraterrestrial jerks who would destroy it just because they’re meanies. Despite a few issues like the dodgy controls, Wonderful 101 is a game that truly needs to be experienced to be understood, because there is nothing quite like it out there as of yet.