Intergalactic travel can be quite risky. However, there are certain situations that may require a society to race through the cold, lonely vacuum of space at super high velocities. Perhaps the average temperature of your planet has risen too high for it to be habitable and you must leave to find a world with a more hospitable climate. Maybe by some cruel twist of fate Sarah Palin has become supreme ruler of your planet’s unified government. In Pikmin 3, the reason three intrepid explorers Alph, Brittany and Charlie have taken to the stars is that the diminutive people on their home planet of Koppai simply have forgotten to plant enough trees to feed their fruititarian society, and now they are on the verge of starvation.

Gameplay
When their ship unexpectedly crash lands on a planet far from their own, Alph and his gang are split up. Players are tasked with guiding him as he attempts to reunite with his crew mates as well as forage for enough food to take back home. You do this with the help of Pikmin, which are overwhelmingly adorable plant-based creatures that magically grow from seeds sprouted when they feed their home (an Onion) a defeated enemy or special pellets harvested from flowers in the area. As you help the Pikmin swell their ranks, they will help you with the wide variety of tasks that are required to complete the overarching mission of the game: to find food. They can help break down walls in your path, defeat enemies that would easily overwhelm you if you were alone, and carry things too large for you to carry. 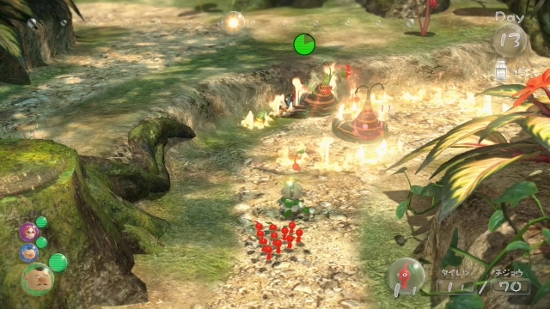 Fling the fire resistant red Pikmin at these flaming slugs and they will give it a swift beatdown.

For the most part Pikmin are smart enough to do the task required of them, they just often need a fling in the right direction. Throw enough of them at an apple and they will carry it back to the base on their own. Toss enough yellow Pikmin into a gap in an electrical wire, and they will join hands to complete the circuit and power the device the wire is attached to. Knowing each color of Pikmin’s strengths and weaknesses will be crucial to everyone’s success. For example, blue Pikmin can work in water, yellow Pikmin are good at digging and are immune to electricity, and the newly introduced rock Pikmin are great for breaking down heavy duty structures.

When you start reuniting Alph with his other shipmates is when the gameplay really becomes new and unique. There will be many situations that require you to split your squad of Pikmin between the leaders and set them on different tasks. While one leader with 20 Pikmin is working on breaking down a barrier, another leader and their squad can be carrying some fruit back to base while the third leader works on a boss battle. Switching control between leaders is seamless, and at all times you’re able to monitor each team’s progress on the GamePad.

The GamePad actually has a parallel device in-game, called the KopPad. The KopPad offers a variety of useful functions to Alph and his crew, such as an area to view hints and tips collected during the game, a sort of encyclopedia describing all the fruit gathered and a map that offers an overview of the area. It is through the map that the new “Go Here” function is used. Players can select a spot on the map to send a leader to and they will walk there on auto pilot. This is incredibly helpful if you are trying to quickly accomplish two different tasks at the same time, or if you are just too lazy to walk places on your own. Like the real-world GamePad, the KopPad has a built in camera that any of the leaders can use to take photographs that you can then post to Miiverse. This is much different than simply taking a screenshot; you can adjust the angle and even zoom the lens.

Explorer notes on the KopPad will be a valuable source of information.

Players who are familiar with the Pikmin franchise from it’s GameCube days will feel right at home when they fire up Pikmin 3 for the first time. The game controls quite nicely with just the GamePad alone, and even offers off-screen play. More precise controls can be taken advantage of by hooking up a Wii Remote and Nunchuck, but the Classic and Pro controllers can also be used. Most tasks can be performed simply by throwing enough Pikmin at the thing that needs moved, destroyed or built. Once they hit their target the cute little buggers will set to work dismantling it, moving it, or killing it. A simple toot of the leader’s whistle will be enough to cancel what the Pikmin are doing, or call stray ones to you.

It is a sad but inevitable truth that while you are adventuring with your army of Pikmin that you will lose some. A couple may fall into the water and perish, some may get burned to a crisp but many of them will simply get eaten. Since they’re so cute and offer their much needed assistance so freely it is difficult not to feel a pang of guilt when one gets gobbled up because you threw it at the wrong spot on an enemy. As their leader, you have helped them obtained items the Onion can use to make more Pikmin, and even plucked them from the ground after they sprouted. You have guided them through rough and hazardous terrain, and commanded them tactically when they have to face an enemy. By the time you complete the first mission it will be crystal clear that Pikmin are not just 100 tiny tools in your tool box; they’re creatures you can’t help but feel responsible for. 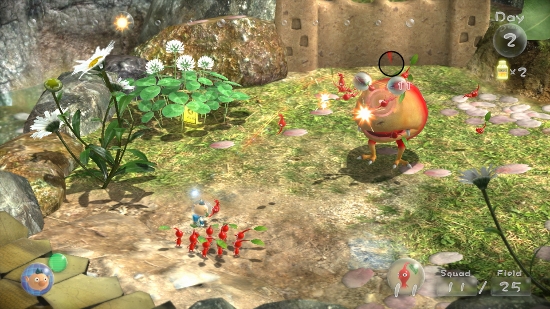 Battling enemies is not without consequence. Some of your tiny buddies are bound to take a fall.

Presentation
The environments that Alph and his crew will be adventuring in are rendered in gorgeously realistic manner. Sunlight passes through foliage and leaves believable shadows on the ground. Water ripples with perfect fluidity and ideally reflects the world around it. One thing that was noticed immediately was items closer to the camera are slightly out of focus – the game is full of tiny details like that to help flesh out its immersion factor. As you are exploring this mysterious planet with these tiny spacefarers, you will be witnessing some of the best lighting, textures, and particle effects ever seen in a game published by Nintendo.

It is through these beautifully rendered environments that the scale of the game’s numerous protagonists is so perfectly conveyed. You will be building bridges not from stone, but rather the shattered remains of a terra cotta pot almost three times your size. An orange is simply too big to be managed with one hand; you must now ask nine or ten of your little friends to carry the small citrus globe for you. While manipulating the items and the world around you it’s very easy to remember what it was like to be a kid in your backyard, doing things like building a farm out of sticks and a bit of old kite string for the earthworms to live in. It harkens to a time when most of us were content to spend hours trying to build something out of nothing and romp through a world made mostly out of imagination.

Screens like this make you wonder if this is THE game the Wii U was made for.

In contrast to the eye candy of the Pikmin’s world are the adorable little creatures themselves. While they have clearly been styled to illicit the maximum amount of “Awwww!”s from players, they still look almost like they could exist in reality. Alph, Brittany and Charlie also have unusual and non-realistic proportions, but they somehow manage to fit in with the world they populate.

Not only is Pikmin 3 great to look at, but it has great sound too. The main theme of the game has carried through since the title and has lost none of its melancholy. Other familiar themes show up, such as the happy “end of the day” song, but now fully fleshed out with real orchestration. Non-musical sound effects really help reel you in to the world of Pikmin as well. The little guys make the cutest sounds like grunts when they’re carrying something heavy, or little “yum” sounds when they get to eat some nectar. Unfortunately, they also make a heartbreaking cry when they die but it all goes back to making the Pikmin entities you care about rather than just tools you use to get things done.

Multiplayer
The story mode is only single player, but there are two different modes in Pikmin 3 which can be played either alone or with a friend. One is Bingo Battle, in which players receive their own Bingo cards with items on them. You must gather your Pikmin head out into the level, racing against your opponent to collect items. Once the item is delivered to your base, it is marked off on your card and the first player to fill an entire row or column wins. Mission Mode is a game that asks players to cooperate to achieve a goal within a set time limit. It played a lot like the Pikmin themed game from NintendoLand, and was definitely made for a gamer that is in more of a casual mood. Both of these modes were a lot of fun and they seemed to fit right in with the rest of the game. To add to the replay value of the game, there are even leaderboards for these modes so you can spend endless time trying to beat other people’s scores. 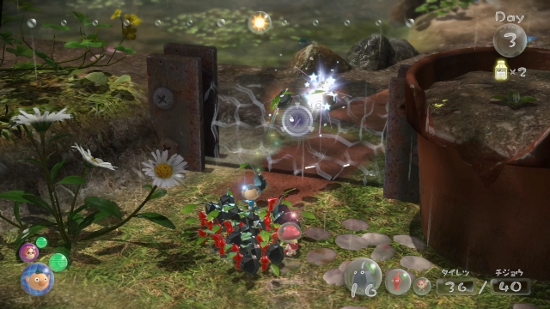 I’m a little scared to count how many times I said “cute” in this review, but most of them are warranted because Pikmin 3 is an incredibly cute game. Not only are the Pikmin themselves cute, but the other characters have been crafted with such a high degree of whimsy that it’s sometimes easy to forget that this is a fairly serious game at its core. Layered under this cuteness is a nearly perfectly constructed real-time strategy game that will have you not only managing your resources, but will also have you feeling like they are 100 of your friends that you actually care about. When they fall in battle, you won’t just be upset that you have to sprout more Pikmin – you will actually be mourning fallen comrades. Whether this is your first time journeying with these tiny plant people, or you’ve been waiting for over a decade for a new adventure, Pikmin 3 is sure to win not only the money from your wallet, but your heart as well.