Picture the darkest night you can think of. You’re all alone and exhausted in your bedroom, yet you can’t sleep. An unhealthy obsession with a new video game has taken over your thoughts so thoroughly that your only hope for relief is to just give in and play the game, despite your mother’s wishes. Just as you begin to feel at ease and completely engrossed in the game, there are footsteps outside your door. To avoid a verbal lashing from your forked-tongued mother, you pause the game and dart under the covers. The door handle jiggles a couple times, but it was only your cat trying to get in to snuggle with you for the night.

The tension that had mounted while you were cowering under your blanket releases instantly as you turn your game back on. It is then that the television flickers to life. You give it a quick glance over your shoulder, but think nothing of it – even as a vaguely human silhouette wavers into view within the static. You return your attention to the beloved electronic toy in your hands just a split second before your mother, who has obviously learned a few tricks from the freaky little girl in The Ring, bursts from your TV screen and busts you playing instead of sleeping. 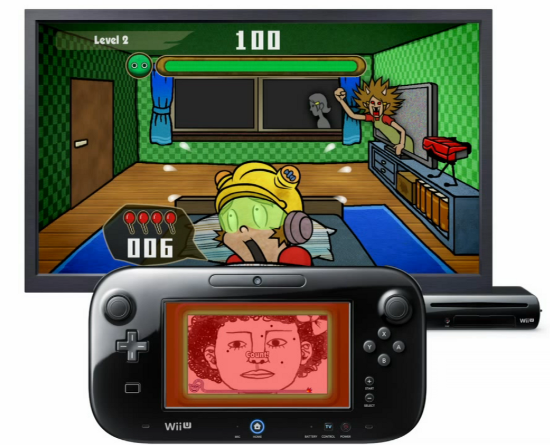 "Gamer" is more terrifying than you could possibly imagine!

That may sound like the plot of a low budget horror movie you find on Netflix, but it is actually the premise for “Gamer”; the micro-game collection that could easily be considered the crown jewel of Nintendo’s recently released Game and Wario for the Wii U. This particular challenge puts players in control of the familiar character 9-Volt as he tries his hardest to stay awake and play classic Warioware micro-games while avoiding detection from his mother. All of the gaming action actually takes place on the GamePad, while 9-Volt’s psychopathic mother stalks him on the television. This truly exemplifies the idea of “asymmetrical gaming” that Nintendo had in mind with the Wii U, and is actually quite a bit of fun despite the fact that it is likely to raise anyone’s blood pressure to an unhealthy level due to stress. As you complete 9-Volt’s levels, you are rewarded by gaining access to his buddy 18-Volt’s levels, which are basically the same except 18-Volt is allowed to stay up as long as he wants so you can simply enjoy the micro-games.

Highlights
Some of the mini-game challenges stick out as being especially well-made. The aforementioned “Gamer” was definitely the best single player offering, though I at times was not feeling particularly sharp enough to essentially play two games simultaneously. Shutters was also pretty fun, and despite the fact that turning the GamePad into a camera wasn’t particularly imaginative, it was executed well. Disco dancing Jimmy’s skiing game boasted some of the best music in the game with ski bunnies oohin and aahing as he zipped down the slopes. It also controlled quite nicely by simply twisting the GamePad from side to side in order to steer him while he raced downhill.

Even though there are fewer multiplayer games, those seemed to be more fun. Playing “Islands” with friends is a real treat, as long as you can get over the fact that they will be screwing you over to make sure more of their pieces remain on the ever-changing playing field. There’s also “Sketch”, which is basically a game of Pictionary jacked up on too much caffeine. Being able to post the awful drawings you and your friends create to Miiverse is an added bonus. 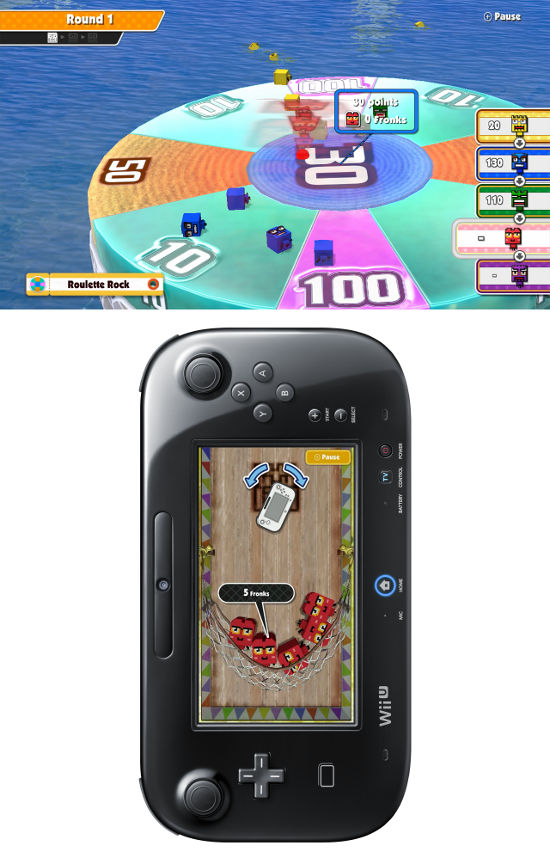 "Islands" is easily the best multiplayer game in the collection.

If you’ve played any Warioware games before, the visual style will be familiar to you. The big difference is that this time everything is rendered in high definition, so all the colors are bright and lines are crisp and clean. The art style used is pretty cartoony, which helps convey the tone of the game perfectly. The graphics really shine during the cutscenes used to set up the scenario for each of the single player games.

One of the most interesting features of Game and Wario is that all of the mini-games, be they single or multiplayer, only use the GamePad for control. There are a wide variety of control schemes that involve a mixture of buttons, touch screen, and motion controls. You will be using the GamePad to do a crazy assortment of things from shoot arrows tipped with noses, take photos, or block cannon balls. All of the games are put together in a way that really shows off the different ways the Wii U’s unique controller can be put to use, and it would be great to see third party developers pick up on some of these ideas for their own titles.

Rewards for completing games in single player mode are more diverse than just a score or unlocking new features. Players are also rewarded with tokens that can be used to unlock things in the Mega Collection. By spending a certain amount of their tokens, players can receive a random micro-game they can play endlessly whenever they want. Some of these are actual games, but quite a few of them, like “Forgetful King”, are more like virtual toys that have been specifically designed to be enjoyed by the kind of gamers that are into Wario’s brand of wacky and mildly crude humor. In this particular reward, you play the role of an assistant who is helping a king remember what he wants to say to his subjects. You verbally read the line into the GamePad, only to hear your own voice played back in a heavily altered state. After two or three readings, it is easy to slip into a grandiose, over-the-top tone of voice that is completely worthy of an animated king.

Lowlights
Sadly, all is not well in the house that Wario built. There are a handful of mini-games in this collection that don’t quite hold up to the standards set by the games. One in particular, “Disco”, was the one I personally was looking forward to since I love a good rhythm game. However, the soundtrack chosen for these challenges is so dull and underwhelming it is nearly impossible to keep a solid beat. Unless you are an amateur contortionist or a proficient yogi, “Ninja” will also be lackluster. The game requires you to tilt the GamePad in tons of different angles to guide a persistently jumping ninja to his goal. You also need to look at the GamePad’s screen in order to control the ninja properly so it is quite easy to end up hunched over your controller, swiveling and pivoting like a fool. That isn’t to say the game is necessarily bad, but perhaps just not fully thought out. 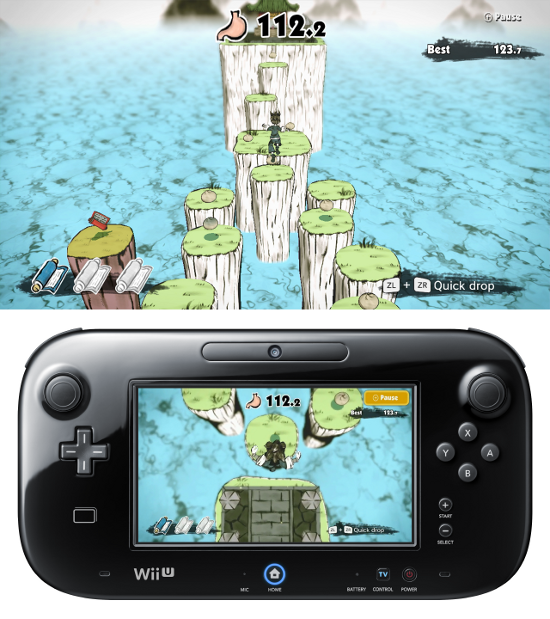 The biggest downfall of Game and Wario was that the assortment of multiplayer games was so skimpy. Given Nintendo’s desire to get people to play games together in real-life, it is hard to understand why a structure more like WarioWare, inc.: Mega Microgame$ wasn’t followed. In it, everything could be played in single or multiplayer without even changing the fundamental game experience.

Whether you’re nine years old, huddling under the covers in your room or you’re 35 years old and live in your mom’s basement, it is easy to feel so excited about a new game that you’d rather loose sleep than playtime. Game and Wario is fun, and it will get most players using their GamePads in ways they never have before, but it certainly isn’t the game that’s going to keep you up at night. There are some great mini and micro-games contained within it, but a lot of them lack that certain something that makes you want to keep replaying it. Just try not to spend too much time playing “Gamer”, or you’ll have a hard time sleeping in the same house as your mother without closing the blinds, locking the door, and making sure the TV is unplugged.