sibling rivalry – n. the competition that exists between brothers or sisters, but especially brothers; often characterized by jealousy over each others’ mustaches, physical prowess and the ability to woo princesses

Sometimes it can be tough to have a brother. If you are half of a pair of brothers, you are probably constantly being compared to your sibling, and quite often in unfair ways. Maybe you don’t churn butter as well as your brother, or he knows more lyrics to Fiddler on the Roof songs than you do. Maybe he’s better at French braiding hair, always wins when you guys play croquet, or gets just a little bit bigger than you when you guys both grab a Super Mushroom. That’s all just typical brother stuff, right?

In the case of two of perhaps the most famous brothers of all, Mario and Luigi, the comparisons are especially unfair. Luigi is taller and thinner than his brother, and he can jump higher and further (in most situations). Luigi has been given an actual personality, whereas Mario is a relatively flatter character, so upon reflection it is difficult to understand why Mario gets all the glory. Thankfully, Nintendo has seen fit to give Luigi some time in the limelight by making 2013 the “Year of Luigi”. Now that all Boos know he means business, he gets to flutter jump his way through 82 levels of Mario-free platforming in New Super Luigi U, which is currently available in the Nintendo eShop as DLC for New Super Mario Bros. U.

The Good
When you fire up New Super Luigi U and begin the first level, you will instantly hear the frantic “time’s almost up” sound. That’s because each level only allots 100 seconds for Luigi to find all three Star Coins and make it to the flagpole at the end. At first, it seems like this will be a huge downfall of the game but the levels are significantly shorter than levels in New Super Mario Bros. U, and if you are efficient the time limit will be sufficient. There were, in fact, several times when playing that the shorter time seemed like a blessing because the time expired just before my ragequit sensors engaged. Granted, this meant starting the level over again but it seemed like one reason Nintendo made each level so short was to force players to take a break every now and then and to keep their customers from doing something irrational to their systems or game discs. 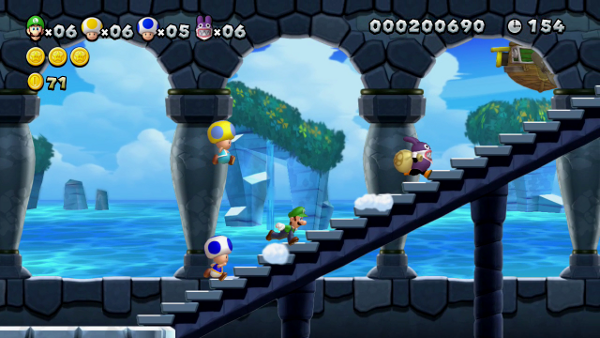 Multiplayer in the game is still as fun as it has ever been in the New Super Mario series; for some Star Coins and levels it seems like it is almost crucial to have a friend to help you. With two players it is easy to exploit the “bubble” function to get Star Coins. For example, a seemingly unreachable Star Coin hovering below a platform could be obtained by one player standing somewhere safely, and the other aiming a jump to grab it and then pressing A to enter the safety of the bubble, which allows you to float safely past all enemies and to where your comrade is standing. “Bubbling” is also useful for when you begin to feel the person you’re playing with is taking a bit too much of a fast and loose approach to the game. You can simply enter your bubble and float safely behind him, without worrying about their frantic jumping and running causing you to lose a life.

Since Mario is inexplicably absent (presumably out canoodling Daisy) for this particular outing into the Mushroom Kingdom, the notorious Nabbit has been drafted to take his place in the line-up of playable characters. Unfortunately, despite his recent change of heart he doesn’t open up his bag of stolen power-ups to share! This may seem strange addition to the playable characters, but Nabbit actually offers an interesting twist to how the game plays since he is immune to all enemies. The trade-off to this is that he is unable to use any power-ups, so most players will likely find themselves only utilizing Nabbit in situations where his unique abilities will grant easier access to a Star Coin or open a path to a hidden exit.

Here’s an interesting side note about Nabbit — even though he is playable, the bonus stages in which you must chase down Nabbit still appear in New Super Luigi U. Perhaps Nabbit is simply helping Luigi out to gain access to more power-ups, or maybe there is a secret society of Nabbits all hell-bent on pillaging the Mushroom Kingdom of their recently discovered bounty of Acorns. Could it be that an army of clones was sent by the army to infiltrate Princess Peach’s domain and overthrow the throne?! Whatever the reason, it’s safe to say Nabbit is one tiny, dastardly creature that we should all keep a VERY close eye on. 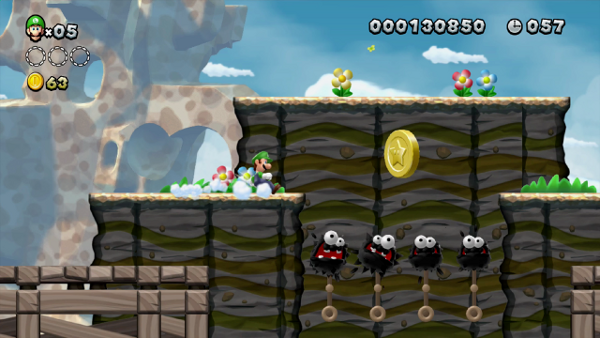 New Super Luigi U is clearly the cornerstone of Nintendo’s “Year of Luigi” offerings, and they’ve proven that by hiding a Luigi in each of the game’s levels. For example, while Squirrel Luigi is gracefully gliding to his death in a Piranha Plant’s mouth, you will be delighted to find Luigi’s face hidden in the fiendish flower’s pipe. There is no in-game reward for finding these Easter Eggs, but you will probably be very excited when you see one nonetheless.

The Bad
Previously we mentioned that the paltry 100 second time limit for levels would eventually seem like a blessing, but there is the possibility that players will feel cursed by it instead. It can create a certain sense of panic that leaves you thinking “OMG JUST HURRY TO THE FREAKING FLAG”, rather than thinking how to safely guide Luigi and his crew safely through the level and collect the precious Star Coins. The game is also still sometimes seems hard just for the sake of being hard, but that could just be this particular reviewer’s mild ineptitude with platformers that makes the game seem harder than it is. 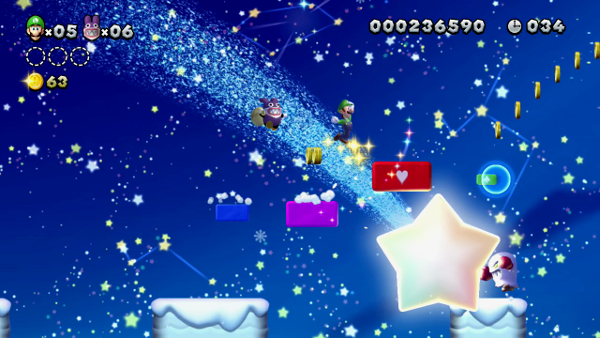 Speaking of difficulty – players that are looking to get a 100% complete on New Super Luigi U will probably find themselves consulting walkthrough videos more frequently than they usually do. This is due to the fact that Star Coins and secret exits seem to be more deviously placed than they ever have been before. For example, in one level the secret exit is placed in a compartment hidden by foreground items (which isn’t too uncommon) but there is also a row of breakable bricks placed over the top of the compartment so you have to do a butt bounce maneuver to even access it. If you weren’t just randomly butt bouncing everywhere there is a good chance you would never have found the exit.

Our definition of sibling rivalry may not have been completely accurate, but it’s pretty easy to define a fun game when you have a great title like New Super Luigi U as a point of reference. The game is challenging without being too frustrating, which makes it very rewarding when you get something accomplished. Luigi fanatics have been around for a long time, and now their fandom is being validated as their lanky mustachioed hero gets his time to shine. The game may have a few shortcomings, but Luigi deserves to have a game tailored for his unique abilities and one in which he doesn’t have to worry about being overshadowed by his brother. After all, he’s taller, thinner, a better jumper and he’s probably better at French braids too.