When someone says the name “Donkey Kong” to you, what do you think of? The first words that pop into my head are “barrels”, “bananas”, and “HOLY CRAP…HARDEST GAME EVER”. That last little bit probably popped into your head too if you ever played the original Donkey Kong Country Returns on the Wii. Not only was it a fun little platformer with adorable enemies, but it is probably one of the hardest platformers Nintendo had ever released; it was hard because it was designed to be hard, not because it was made poorly. Fundamentally it was the game’s smart and solid design that kept me from buying a barrel for the sole purpose of smashing my Wii to smithereens.

Background
If you’re one of the people who has never played the original Donkey Kong Country Returns, you may be wishing for a little additional information right now. This game was considered one of the crown jewels of the Wii lineup when it was out, and for good reason. Visually, the game pushed the Wii hardware well past what anyone had expected it could do. The game was also a well-designed, challenging romp through the world of Donkey and Diddy Kong. You guided the dynamic duo through a ton of differently themed levels. Environments ranged from typical leafy jungle zones, dark mines where you get to ride in carts, all the way to beaches with intense tidal waves that washed away everything in their path – including Donkey and Diddy. 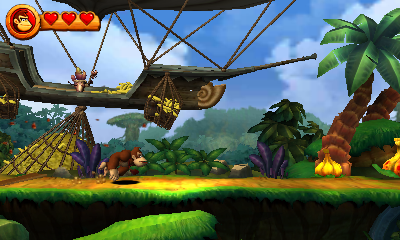 Along the way, you occasionally found Diddy, who would ride on your back and allow you to use his rocket pack to your advantage. The rocket pack came in especially helpful in completing the collections of letter tiles (which spell “KONG”) and puzzle pieces that were required to unlock bonus content within the game. Other modes of transport included a rhino that could walk on or bash through just about any hazard or enemy, and a rocket made out of a barrel. What made Donkey Kong Country Returns such a challenging game, was that it was completely unforgiving about its timing; if you missed a jump by even one millisecond, you would probably fall to your doom and have to start the level all over again.

The Old
Recently Nintendo re-released the game everyone loved to hate on the 3DS as Donkey Kong Country Returns 3D. Essentially, the Wii version of the game was ported down for the 3DS, and that was a feat so well executed it almost boggles the mind. There are a few subtle differences between the 3D version and it’s predecessor, but a side-by-side comparison would show very little loss of visual quality to the average person. The excellent score from the original game even remained intact in its entirety. The only real change is the addition of 3D graphics, which, unfortunately, aren’t the best that have been seen to-date on the system. It is incredibly hard to find the “sweet spot” that is required to experience the 3D effect, which means the 3D can only be seen if the person playing can remain completely still. If you can keep the 3DS motionless long enough to enjoy the effect, it actually quite cool. A lot of levels have the gorillas in the background, so the foreground imagery really stands out. It can even be a useful tool to complete some of the challenges the game lays out, such as shooting Donkey Kong out of a barrel into the mouths of a giant rotating monkey idol. 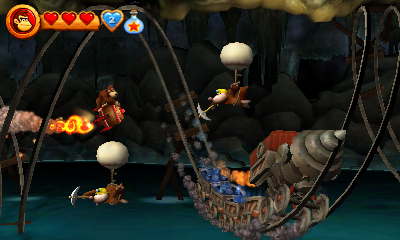 Vehicle levels like this are still hard, despite New Mode.

It’s highly unlikely that the average gamer will be able to hold still enough to see the new 3D graphics, because this game is still one of the hardest, tough-as-nails platformers out there. Anyone who isn’t drugged out of their mind on sedatives will be shaking their 3DS a handful of times due to the rage boiling up inside of them while they’re playing. Thankfully, Nintendo has provided a way for platforming impaired individuals (like myself) to play this game without the risk of damage to their personal property.

The New
In addition to the version of Donkey Kong Country Returns that was available on the Wii, there is a “New Mode” available. In this mode, the actual game itself hasn’t been made any easier, but the things that help you along the way have. For starters, you get an extra heart on your life meter ALWAYS. That means with Diddy Kong on his back, the DK duo gets a whopping six hearts as opposed to four. Add the extra heart item to that and you’ll be cruising smoothly through most obstacles the game has to throw at you. In addition to the extra heart, there is also another inventory slot so an extra, incredibly helpful item can be brought along. The item shop, run by the curmudgeon Cranky Kong, has items in New Mode that aren’t available in Normal Mode.

First, in New Mode players will have access to the Green Balloon which, when equipped, saves you from one nasty fall. When you fall, there is a few second window within which you can float back to safety. Also in New Mode is the portable DK barrel that allows the player to summon Diddy with a simple tap of the touch screen. Not only will you get to use the jet pack, but when you use the barrel all hearts are refilled instantly. Not only are these game-changing items significantly cheaper in New Mode, but the banana coins you need to purchase them are found in much greater abundance than they are in the original mode. Players who aren’t too proud to dabble with New Mode will find these valuable coins scattered in all kinds of new nooks and crannies, and even pop out of enemies when you jump on several in succession without touching the ground. 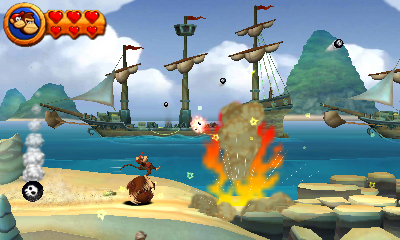 There is quite obviously a market for insanely hard games. There are, however, the kinds of people that want a game that is fulfilling without being frustrating, pandering, easy, or boring. Nintendo may be notorious for re-releasing old games on new hardware every now and then, but Donkey Kong Country Returns 3D is only a half rehashed game. The other half has been streamlined for the type of gamer who wants to feel like they have a chance at a game, without feeling that heart-pounding, controller-crushing sense of rage wash over them when they fall into the same bed of bamboo spikes for the twentieth time. It’s pretty safe to say that not only is this game a classic Nintendo title magically slimmed down to handheld size, but with the addition of New Mode the first words you think of when someone says “Donkey Kong” to you will be more along the lines of “fun” and “awesome”.